WASHINGTON, DC – September 30, 2013 – The aerosolized dust created by vacuum cleaners contains bacteria and mold that “could lead to adverse effects in allergic people, infants, and people with compromised immunity,” according to researchers at the University of Queensland and Laval University. Their findings are published in the October issue of Applied and Environmental Microbiology.

This finding is worrying as the study found resistance genes for five common antibiotics in the sampled bacteria along with the Clostridium botulinum toxin gene. This is of particular concern as, “The dust found indoors could act as a vehicle for infant botulism infection that can have severe consequences,” including sudden infant death syndrome, according to previous studies.

Researchers used a special clean air wind tunnel to measure vacuum emissions from 21 vacuums of varying quality and age. The clean air wind tunnel enabled them to eliminate other sources of particles and bacteria, says Luke Knibbs, a researcher involved in the study. “That way, we could confidently attribute the things we measured purely to the vacuum cleaner.”

The results were in accord with earlier studies which have shown human skin and hair to be important sources of bacteria in floor dust and indoor air—which can be readily resuspended and inhaled, says report co-author, Caroline Duchaine.

Knibbs hopes that other studies will follow this one, raising the profile of potential indoor sources of culprits in unsolved medical cases. The investigators conclude their report, saying that vacuum cleaners are “underrepresented in indoor aerosol and bioaerosol assessment and should be considered, especially when assessing cases of allergy, asthma, or infectious diseases without known environmental reservoirs for the pathogenic or causative microbe.”

A copy of the article can be found online at http://bit.ly/asmtip0913g.

Applied and Environmental Microbiology is a publication of the American Society for Microbiology (ASM). The ASM is the largest single life science society, composed of over 39,000 scientists and health professionals. ASM's mission is to advance the microbiological sciences as a vehicle for understanding life processes and to apply and communicate this knowledge for the improvement of health and environmental and economic well-being worldwide. 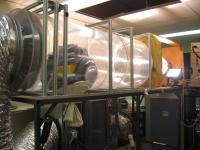