PROVIDENCE, R.I. [Brown University] — Imagine yourself swimming in a pool: It's the movement of your arms and legs, not the viscosity of the water, that mostly dictates the speed and direction that you swim.

For tiny organisms, the situation is different. Microbes' speed and direction are subjected more to the physical vagaries of the fluid around them.

"For bacteria to swim in water," explained Jay Tang, associate professor of physics at Brown University, "it's like us trying to swim through honey. The drag is dominant."

Tang and his team at Brown have just completed the most detailed study of the swimming patterns of one particular bacterium, Caulobacter crescentus. In a paper published online this week in the Proceedings of the National Academy of Sciences (in print Nov. 25), the researchers show how this microbe's movement is affected by drag and a phenomenon called Brownian motion. The observations would appear to hold true for many other bacteria, Tang said, and shed light on how these organisms scavenge for food and how they approach surfaces and "stick" to them.

Caulobacter is a single-celled organism with a filament-like tail called a flagellum. As it swims, its rounded cellular head rotates in one direction, while the tail rotates in the opposite direction. This creates torque, which helps explain the bacterium's nonlinear movement through a fluid. What Tang and his team found, however, is that Caulobacter also is influenced by Brownian motion, which is the zigzagging motion that occurs when immersed particles are buffeted by the actions of the molecules of the surrounding medium. What that means, in effect, is that Caulobacter is being pinballed by the water molecules surrounding it as it swims.

This twin effect of hydrodynamic interaction and Brownian motion governs the circular swimming patterns of Caulobacter and many other microorganisms, the scientists found.

The researchers also discovered another clue to the swimming behavior: Caulobacter's swimming circles grew tighter as the bacterium got closer to a surface boundary, in this case a glass slide. The tighter circle, the team found, is the result of more drag being exerted on the microbe as it swims closer to the surface. When the microbe was farther away from the surface, it encountered less drag, and its swimming circle was wider, the group learned.

It's this zigzagging effect that helps explain why "most of the time, these cells are not as close to the surface as they are predicted to be," Tang said. "The reason is Brownian motion, because they are jumping around."

That finding is important, because it helps explain the feedings areas for simple-celled organisms. Perhaps more importantly, it may help scientists understand how bacteria ultimately arrive at a surface and adhere to it. The applications range from better understanding the flow and adhesion of platelets in the bloodstream to greater insights into how contaminants are captured as they percolate through the soil.

"As it turns out, swimming is an important mechanism to that adhesion process," Tang said.

The National Institutes of Health and the National Science Foundation funded the work. 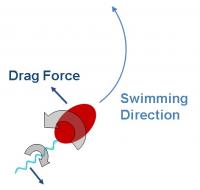