The award ceremony will take place on Wednesday, 30 November 2016 at 16:00 in the university's Senatssaal. The funding from the Dr. Karl Helmut Eberle foundation will be used to support innovative and bold research projects at the University of Konstanz. From 2018 onwards, the annual funding will increase to 500,000 euros.

The award-winning project at the University of Konstanz will guide collaborative research between two established focus areas, material sciences and chemical biology, in a new direction. Bacterial pathogens create serious problems. For example, a significant number of serious diseases that affect patients after operations can be traced back to antibiotic-resistant pathogens. This is why it is of increasing importance to prevent bacteria from colonizing surfaces and forming biofilms. This is, however, easier said than done, since future approaches should avoid the use of antibiotics due to potential bacterial resistance.

The team around material scientist Sebastian Polarz and biologist David Schleheck will therefore blaze a new trail. Their idea is to place miniature factories on surfaces that will create a cocktail of chemical compounds. Without endangering humans, the released substances will then specifically target bacteria that attempt to replicate on these surfaces. The factories consist of tiny particles, so-called nano particles, in a "sponge" with extremely small hollow spaces or "pores". These pores have a diameter of five nanometres - a ten-thousandth of the diameter of a human hair - and house the active components to generate antibacterial substances.

They can, for example, release highly reactive oxygen species against which the pathogens are defenceless. Or special enzymes on and within the particles will start digesting the weakened bacteria. In the long run, the researchers intend to advance two visions: First, the different particles on the surfaces should interact in order to create a much stronger antibacterial response than would be possible if only one type of particle was attached to the surface. Second, the nano factories should eventually become self-sufficient. This means that they should be able to extract everything required for the production of the active substances from their environment without the need to supply it from the outside.

Sebastian Polarz studied chemistry at the University of Bielefeld and earned his doctorate at the Max Planck Institute of Colloids and Interfaces in Potsdam, Germany. He was supported through the Emmy Noether Programme for junior researchers and received a Consolidator Grant from the European Research Council in 2014. He has been a professor of inorganic functional materials at the University of Konstanz since 2007.

Starting in 2016, the Dr Karl Helmut Eberle foundation will provide an annual research prize for research projects at the University of Konstanz. In line with the donor's wishes, the associated funds will be allocated irrespective of the scientific discipline and on a performance-oriented basis. Interdisciplinary and international projects are expressly welcome. The aim is to actuate cutting-edge, innovative and bold research projects, thereby enhancing the research profile and the continued development of the University of Konstanz. 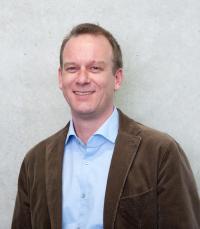