Abu Dhabi, UAE, July 5, 2021: NYU Abu Dhabi (NYUAD) researchers uncovered a code that sets the genome of the liver to account for the remarkable ability for this organ to regenerate. This finding offers new insight into how the specific genes that promote regeneration can be activated when part of the liver is removed. These findings have the potential to inform the development of a new form of regenerative medicine that could help non-regenerative organs regrow in mice and humans.

While other animals can regenerate most organs, humans, mice, and other mammals can only regenerate their liver in response to an injury or when a piece is removed. NYUAD researchers hypothesized that the genes that drive regeneration in the liver would be controlled by a specific code that allows them to be activated in response to injury or resection. They hone in on the epigenome, which is the modifications on the DNA that alter the gene expression, as opposed to changing the genetic code itself.

Using a mouse liver model, the team of NYUAD researchers, led by Professor of Biology Kirsten Sadler Edepli, identified the elements of the epigenetic code present in quiescent liver cells - cells that are currently not replicating but have the ability to proliferate under the right conditions - that activate specific genes to regenerate. Genes involved in liver cell proliferation are silenced in livers that are not regenerating, but the surprising finding was that they reside in parts of the genome where most genes are active. The researchers found that these pro-regenerative genes were marked with a specific modification - H3K27me3. During regeneration, H3K27me3 is depleted from these genes, enabling their dynamic expression and driving proliferation.

In the paper Chromatin states shaped by an epigenetic code confer regenerative potential to the mouse liver published in the journal Nature Communications, Sadler and the lead research scientist on her team, Chi Zhang, present the discovery that the mouse liver contains elements of the epigenetic code that allow pro-regenerative genes to activate when signaled. Epigenetic patterns are a well-established mechanism that coordinate gene expression. However, the way epigenetic patterns contribute to gene expression in the liver or how they impact liver regeneration was previously unknown. Their research uncovered six distinct chromatin states in the mouse liver corresponding to specific epigenetic marks, providing the first chromatin map of this important organ and showing that the elements of this map are essential for liver regeneration. This finding provides a mechanism that keeps cells in the liver in a "ready-set-go" state, in preparation for the signal to regenerate.

"The secret to regeneration is locked in a code in the liver epigenome. We are now studying the 'writers' of the epigenetic code -- the enzymes that create the epigenetic marks -- to see how this epigenetic code responds to aging, as the liver's ability to regenerate declines in older animals - including humans," said Sadler. "The continued study of the liver's remarkable ability to regenerate provides promise for the development of regenerative medicine; perhaps we can even try to write the code that allows regeneration in the young liver to cells in older animals, or even to tweak this code in other organs that don't regenerate and currently can only be replaced using complex, high-risk transplants."

NYU Abu Dhabi is the first comprehensive liberal arts and research campus in the Middle East to be operated abroad by a major American research university. NYU Abu Dhabi has integrated a highly selective undergraduate curriculum across the disciplines with a world center for advanced research and scholarship. The university enables its students in the sciences, engineering, social sciences, humanities, and arts to succeed in an increasingly interdependent world and advance cooperation and progress on humanity's shared challenges. NYU Abu Dhabi's high-achieving students have come from over 115 countries and speak over 115 languages. Together, NYU's campuses in New York, Abu Dhabi, and Shanghai form the backbone of a unique global university, giving faculty and students opportunities to experience varied learning environments and immersion in other cultures at one or more of the numerous study-abroad sites NYU maintains on six continents. 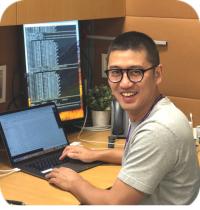