Conservationists working in Central Africa to save the world's rarest gorilla have good news: the Cross River gorilla has more suitable habitat than previously thought, including vital corridors that, if protected, can help the great apes move between sites in search of mates, according to the North Carolina Zoo, the Wildlife Conservation Society, and other groups.

The newly published habitat analysis, which used a combination of satellite imagery and on-the-ground survey work, will help guide future management decisions for Cross River gorillas living in the mountainous border region between Nigeria and Cameroon.

The study appears in the online edition of the journal Oryx. The authors include: Richard A. Bergl of the North Carolina Zoo; Ymke Warren (deceased), Aaron Nicholas, Andrew Dunn, Inaoyom Imong, and Jacqueline L. Sunderland-Groves of the Wildlife Conservation Society; and John F. Oates of Hunter College, CUNY.

"We're pleased with our results, which have helped us to identify both new locations where the gorillas live and apparently unoccupied areas of potential gorilla habitat," said Dr. Bergl of the North Carolina Zoo, lead author of the study. "The study is a great example of how scientific research can be directly applied to great ape conservation."

WCS conservationist and co-author Andrew Dunn said: "The good news for Cross River gorillas is that they still have plenty of habitat in which to expand, provided that steps are taken to minimize threats to the population."

Using high-resolution satellite images, the research team mapped the distribution of forest and other land-cover types in the Cross River region. In order to ground truth the land-cover map, field researchers traveled to more than 400 control points to confirm its accuracy. They found that the land-cover rating system had an accuracy rate of 90 percent or higher. The land-cover map was combined with other environmental data to determine the extent of the Cross River gorilla's habitat. The entire Cross River region was divided into 30 x 30 meter pixels, and each pixel was rated in terms of its suitability as gorilla habitat (with steep, forested areas of low human activity receiving a high rating, and lowland areas more significantly impacted by people receiving a low rating). These ratings were translated into a habitat suitability map for the area.

With the new habitat suitability map to guide them, the team then selected 12 locations possessing all the characteristics of gorilla habitat (mainly forested landscapes far from human settlements) for field surveys. Most of these areas had no previous record of gorillas, but to their surprise, the team found signs of gorilla presence (in the form of gorilla dung and nests) in 10 of the 12 sites, thereby confirming the value of using satellite image analysis to predict suitable habitat and to prioritize areas in which to conduct further surveys.

Overall, the findings of the study represent a significant expansion of known Cross River gorilla range. The area now known to be occupied by gorillas is more than 50 percent larger than had previously been documented. The findings also support recent genetic analyses that suggest a high degree of connectivity between the 11 known locations where gorillas occur.

The study also located parts of the population under threat from isolation through fragmentation. For example, Afi Mountain Wildlife Sanctuary in Nigeria, which contains a significant portion of the Cross River gorilla population, is only tenuously connected to the nearest sub-population of gorillas by farmland and other forms of habitat degradation.

"For small populations such as this one, the maintenance of connective corridors is crucial for their long term survival," said WCS researcher Inaoyom Imong. "The analysis is the first step in devising ways to rehabilitate degraded pathways."

Authors of the study will use their findings at the upcoming Cross River gorilla workshop (scheduled for February in Limbe, Cameroon) to help formulate a new 5-year regional plan for the subspecies. "This latest research has greatly expanded our knowledge on Cross River gorilla distribution, which will lead to more effective management decisions," said WCS conservationist and co-author Aaron Nicholas.

Dr. James Deutsch, Executive Director for WCS's Africa Program, said: "Accurately assessing the state of available habitat is a vital foundation for future conservation efforts for the Cross River gorilla. A new action plan for the subspecies will build on the collaborative partnership already underway between Nigeria and Cameroon and ensure a future for this unique primate."

The Cross River gorilla is the rarest of the four subspecies of gorilla, numbering fewer than 300 individuals across its entire range, limited to the forested mountainous terrain on the border region of Nigerian and Cameroon. The subspecies is listed as "Critically Endangered" and is threatened by both habitat disturbance and hunting, as the entire population lives in a region of high human population density and heavy natural resource exploitation.

Conservation work on Cross River gorillas in this region is a priority for several U.S. government agencies, including the U.S. Agency for International Development, U.S. Fish and Wildlife Service, and U.S. Forest Service. 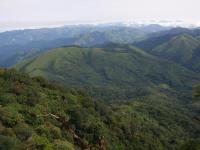