Being the vertebrates with the highest metabolic rate thanks to their rapid wing flaps, the hummingbirds have evolved various types of feeding behaviour. While the nectar-feeders tend to go for food high in energy, strong competition affects greatly their preferences and behaviour towards either dominance, subordination, a strategy known as trapline and a fourth one named hide-and-wait, conclude the Brazilian scientists Lucas L. Lanna, Cristiano S. de Azevedo, Ricardo M. Claudino, Reisla Oliveira and Yasmine Antonini of Universidade Federal de Ouro Preto. Their conclusions following six months of observations in an Atlantic Forest remnant in southeastern Brazil are published in the open access journal Zoologia.

To test previous assumptions as well as their own hypotheses, the researchers placed artificial bird feeders filled with variable in concentration sugar-water solutions across four separate patches at the core of the forest fragment.

The scientists sought to find out whether the birds would show clear preference for the most sugary food source; whether larger size and heavier weight would guarantee better access to the most nutritious feeders; what strategies would be adopted by each species; and which ones would prove the dominant and most aggressive.

As expected, the scientists concluded that the birds prefer the most sugar-dense solutions. However, when subordinate species, such as the white-throated hummingbird and the versicoloured emerald, confronted dominant species guarding the most nutritious food sources, they would be either frightened or expelled following a short chase. Subsequently, these hummingbirds would resort to the feeders with low-sugar solutions.

In their turn, the Brazilian ruby and the violet-capped woodnymph proved to be the dominant and most aggressive species in the studied area. Upon seeing an 'intruder' in their territory, which might be either another species, or belonging to their own, they would vocalise their threats, alert them by perching by the feeder, or expel them following a short pursuit. However, they would only try to limit the access for subordinate hummingbirds if the energy that could be gained from the feeder exceeded the energy loss of the chase.

Contrary to another initial hypothesis, it was not the largest and heaviest species that were the dominant ones. There were two species of hermit hummingbirds which were the largest and the heaviest, however, they expressed no territorial or aggressive behaviour. Instead, they were recorded intruding in the territory of the two dominant hummingbird species. In their turn, the Brazilian ruby and the violet-capped woodnymph would often frighten them. Nevertheless, rather than fleeing, the 'castaways' were seen hiding in the shrubs, remaining quiet, and returning to the feeder as soon as the dominant bird was gone. This behaviour strategy, named hide-and-wait, has not been reported in hermit hummingbirds prior to this study, according to the authors.

Having reported all feeding strategies in their study, the scientists conclude that the dominant territorial species and the trapliners feed most frequently and most sufficiently, as they use the most sugary sources.

However, the authors note that the high abundance of food, as well as the presence of aggressive territorial species might have affected the hummingbirds' behaviour and preferences. 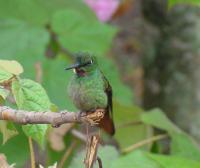