Scientists have found that man-made mercury pollution has reached the bottom of the deepest part of the ocean - the Marianas Trench. This has significant implications for how mercury affects the marine environment, and how it may be concentrated in the food chain. The findings, which come from two independent research groups, are presented at the Goldschmidt geochemistry conference.

Mercury is toxic to humans and other animals, and has been implicated in environmental disasters in the past, most famously at Minamata in Japan in the 1950's where it led to birth defects and severe neurological symptoms. It tends to be concentrated in marine organisms, where small amounts are ingested by some species which are in turn eaten by larger species, meaning that harmful levels of mercury can be concentrated in animals that sit higher up in natural food webs through the process of bioaccumulation. As an example, this leads to mercury concentrations in swordfish being x40 that of salmon. Mercury is generally poisonous at high levels and can be especially dangerous to the developing foetus.

Now two groups of scientists are independently reporting that both manmade and natural methylmercury, a toxic form of mercury easily accumulated by animals, has been found in fish and crustaceans in the 11,000m deep Marianas Trench in the Pacific Ocean. This work is being reported at the Goldschmidt Geochemistry conference.

"This is a surprise" said researcher Ruoyu Sun. "Previous research had concluded that methlymercury was mostly produced in the top few hundred metres of the ocean. This would have limited mercury bioaccumulation by ensuring that fish which forage deeper than this would have had limited opportunity to ingest the methylmercury. With this work, we now believe that isn't true".

Dr Ruoyu Sun, leading a group of researchers from Tianjin University, China, said "During 2016-2017, we deployed sophisticated deep-sea lander vehicles on the seafloor of Mariana and Yap trenches, amongst the most remote and inaccessible locations on Earth, and captured the endemic fauna at 7000-11000 m and collected sediments at 5500-9200 m. We are able to present unequivocal mercury isotope evidence that the mercury in the trench fauna originates exclusively from methylmercury from the upper ocean. We can tell this because of the distinctive isotopic fingerprint which stamps it as coming from the upper ocean."

Independently, a group led by Dr Joel Blum (University of Michigan) sampled fish and crustaceans from 2 of the deepest Pacific Trenches, the Kermadec trench near New Zealand (which drops to 10000m) and the Marianas Trench off the Philippines. They use mercury isotopic signatures at both locations to show that mercury found in trench species is largely derived from the atmosphere and enters the ocean in rainfall. Joel Blum said:

"We know that this mercury is deposited from the atmosphere to the surface ocean and is then transported to the deep ocean in the sinking carcasses of fish and marine mammals as well as in small particles. We identified this by measuring the mercury isotopic composition, which showed that the ocean floor mercury matched that from fish found at around 400-600m depth in the Central Pacific*, Some of this mercury is naturally-produced, but it is likely that much of it comes from human activity.

This work shows that human-released mercury has reached and entered foodwebs in even the most remote marine ecosystems on earth. This better understanding of the origin of mercury in the deepest reaches of the ocean will aid in modelling the fate of mercury in the atmosphere and oceans".

Ruoyu Sun commented "Our findings reveal very little methylmercury is produced in the deep oceans, and imply that anthropogenic mercury release at the Earth's surface is much more widespread across deep oceans than was previously thought".

"We know that mercury is introduced into the environment from a variety of natural sources such as volcanic eruptions and forest fires. However, human activities, such as coal and petroleum burning, mining, and manufacturing, are mainly responsible for mercury deposition to marine environments. We are now learning from these two studies that the effects of this deposition have spread throughout the ocean into the deep sea and the animals that live there, which is yet another indicator of the profound impact of modern human activities on the planet."

This is an independent comment; Professor Rubin was not involved in this work.

*This is the "oxygen minimum zone", where oceanic oxygen concentrations are lowest.

Review: As yet neither study has been formally peer-reviewed, although the Goldschmidt conference reviews this work internally before issuing material to the press.

The Goldschmidt conference is the world's main geochemistry conference, hosted by the Geochemical Society and the European Association of Geochemistry. Held annually, it covers such material as climate change, astrobiology, planetary and stellar development and conditions, chemistry of Earth materials, pollution, the undersea environment, volcanoes, and many other subjects. For 2020 the scheduled Hawaii congress has been moved online, and takes place from 21-26 June, see https://goldschmidt.info/2020/index. Future congresses are in Lyon, France (2021) and the rescheduled Hawaii congress (2022). 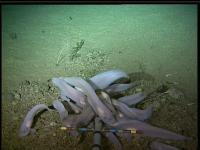