Fat Makes Tuna That Tastes Good, But These Bluefin Are Skinny

DURHAM, N.H. – The quality of giant bluefin tuna caught in the Gulf of Maine has declined significantly since the early 1990s, researchers at the University of New Hampshire have found by analyzing detailed logbooks from a commercial tuna grader at the Yankee Fisherman’s Co-op. The findings, published this week in Fishery Bulletin, indicate potential changes in food sources, shifts in reproductive or migratory patterns, or the impact of fishing may be the cause of this decline.

Walter Golet, a Ph.D. candidate in UNH’s Large Pelagics Research Lab, along with UNH research assistant professor Andy Cooper and Large Pelagics Lab director Molly Lutcavage, partnered with veteran tuna grader Robert Campbell at the Yankee Fisherman’s Co-op in Seakbrook, N.H. to analyze the quality of 3,082 Atlantic bluefin tuna (Thunnus thynnus). “In a drawer, he had two or three notebooks with every fish he graded in the last 14 years, from 1991 – 2004,” says Golet. Golet’s findings corroborated observations by fishermen, brokers and cooperative managers: Not only is the number of giant bluefin in the Gulf of Maine declining, the condition of those fish caught is of much lower quality.

Specifically, Golet and co-authors analyzed the fat and oil content and shape of the tuna. “Fat content is in high demand for the market, because that’s what makes the meat taste good,” he says, noting that fish with well-marbled tail meat, fat in their mid-section muscle and belly, and a rotund shape can command upwards of $50 per pound on the sushi market.

Beyond the tekkamaki, however, fat content is a valuable indicator of the overall health condition of the bluefin. Highly migratory, traveling from their spawning grounds to the Gulf of Maine and possibly across the Atlantic, Atlantic bluefin have high metabolisms and energetic needs. Not surprisingly, bluefin caught in June, shortly after arriving in the Gulf of Maine after a swim of more than 1,000 miles, are lean and of lower quality. Yet Golet and co-authors found that the quality of bluefin caught in August and September, after several months at the Gulf of Maine’s buffet table, is declining. “They look lean,” Golet says.

In 1991, he found, the probability of landing a C+ fish (A being the highest grade) was 16 percent and 9 percent for August and September, respectively. By 2004, the probability increased to 68 percent and 76 percent in the C+ category for August and September, respectively. He also found that the bluefin are leaner on arrival to the Gulf of Maine; the probability of catching a poor quality fish (grade C or worse) in June 1991 was 30% compared with 70% in 2004. Good quality fish, such as B or better, now comprise less than one percent of the commercial catch at this New Hampshire cooperative.

For scientists like Golet and his collaborators at UNH, this research is less about tasty tuna than about understanding and promoting this overexploited fishery. “One of the big consequences of not fattening as much is the potential impact it could have on reproduction,” says Golet. “Reduced energy stores can often force a fish to skip spawning in a particular year.”

Jennifer Goldstein, also a Ph.D. student in the Large Pelagics Research Lab, looked at this link between bluefin body composition and reproductive status in an article published in the July 2007 Marine Biology journal (http://www.springerlink.com/content/q21417091803m56u/fulltext.pdf).

The researchers hypothesize this change in energy – or fat – acquisition could also shift the bluefin tuna’s migration patterns.

Now that the researchers have documented the decline of bluefin quality, they’re looking into the reasons behind it. One obvious cause would be a decline in their food supply; bluefin are voracious predators with a high metabolism. “Bluefin will eat just about anything – sponges, seahorses, dogfish – but according to recent studies, up to 60 percent of their prey is comprised of Atlantic herring,” says Golet, noting that herring, along with mackerel and bluefish, is tuna health food, providing maximum energy to these long-distance swimmers.

Since stock assessments indicate that herring abundance is at historically high levels, however, the researchers wonder if perhaps the herring themselves have experienced a decline in quality, or if they have dispersed into smaller schools, requiring greater energy output: Bluefin have to swim farther for each meal. The “junk food hypothesis” probes whether changes in diet from high-energy food like herring and mackerel to less energetic species like haddock or sand lance results in lower caloric intake. And evidence is mounting to support the hypothesis that bluefin migrations are far more complex than once thought and that bluefin may be traveling farther to the Gulf of Maine; some Atlantic bluefin in the Gulf of Maine have traveled from the central and eastern Atlantic, utilizing far more stored energy swimming greater distances against major currents.

Golet’s research was supported by a grant from the National Oceanic and Atmospheric Administration to Molly Lutcavage. For more information on tuna research and the Large Pelagics Research Laboratory at UNH, go to www.tunalab.unh.edu.

Condition of bluefin tuna in gulf of maine is declining 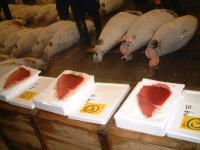