The world's system for allocating fish stocks is being outpaced by the movement of fish species in response to climate change, according to a study undertaken by an international team of marine ecologists, fisheries and social scientists, and lawyers.

"Fish fleeing warming waters will cross national boundaries and add new 'shareholders' to existing fisheries," said senior author William Cheung, associate professor in UBC's Institute for the Oceans and Fisheries and director of science for the Nippon Foundation-UBC Nereus Program, which helped fund the research. "Without a pre-agreed mechanism to accommodate these unexpected fish shareholders, we could witness more international disputes over the allocation of fisheries resources."

The study analyzed 892 fish stocks from around the world using models, developed by Cheung and his team at UBC, that show climate change is driving marine species toward the poles. They found that 70 or more countries will see new fish stocks in their waters by 2100 if greenhouse gas emissions continue on their current trajectory.

"Marine fishes do not have passports and are not aware of political boundaries; they will follow their future optimal habitat," said co-author Gabriel Reygondeau, postdoctoral fellow at UBC. "Unfortunately, the potential change of distribution of highly-valuable species between two neighbouring countries will represent a challenge for fisheries management that will require new treaties to deal with transboundary fish stocks."

The study cited a dispute between Canada and the United States in the 1980s and 1990s after warming regional temperatures caused Pacific salmon to change their migration patterns. U.S. fisheries intercepted Canadian-bound salmon and Canadian fisheries retaliated by targeting salmon migrating to spawn in the U.S. After six years of disagreement, a new joint management agreement was implemented.

"Most people may not understand that the right to harvest particular species of fish is decided by national and regional fisheries management organizations," said Malin Pinsky, an assistant professor of ecology, evolution and natural resources at Rutgers' School of Environmental and Biological Sciences and lead author of the study. "Those organizations have made the rules based on the notion that particular fish species live in particular waters and don't move much but now we know they are moving because climate change is warming ocean temperatures."

The study also cited international fisheries disputes including the "mackerel war" between Iceland and the European Union in 2007.

The study suggests that governments should implement solutions to avoid conflicts such as allowing the trade of fishing permits or quotas across international boundaries.

The researchers say the alternative to such negotiations is grim, including overfishing that reduces food supply, profit, and employment, as well as fractured international relations.

About the Nippon Foundation-UBC Nereus Program

The Nereus Program, a collaboration between the Nippon Foundation and the Institute for the Oceans and Fisheries at the University of British Columbia, has engaged in innovative, interdisciplinary ocean research since its inception in 2011. The program is currently a global partnership of 17 leading marine science institutes with the aim of undertaking research that advances our comprehensive understandings of the global ocean systems across the natural and social sciences, from oceanography and marine ecology to fisheries economics and impacts on coastal communities. Visit nereusprogram.org for more information.

Climate change has fish moving faster than regulations can keep up 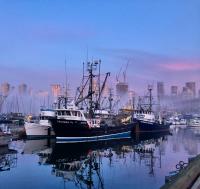 Climate Change Has Fish Moving Faster Than Regulations Can Keep Up