NASA provided rainfall data and cloud height information to the forecasters monitoring the developing tropical cyclone 2 in the western Atlantic Ocean. The Global Precipitation Measurement mission or GPM core satellite passed over the organizing storm on June 19. The storm has already generated a number of warnings and watches in the Caribbean and Venezuela.

The GPM core observatory satellite flew above 02L on June 19, 2017 at 12:16 a.m. EDT (0416 UTC). Data collected by Microwave Imager (GMI) and Dual-Frequency Precipitation Radar (DPR) instruments showed that the potential tropical cyclone contained some heavy rain showers west of the low pressure area's center of circulation. Convective precipitation was falling at a rate of greater than 2.75 inches (70 mm) per hour in that area.

Data gathered from GPM's radar (DPR Ku Band) was used to create three dimensional look at the storm that showed the height of the precipitation columns within the potential tropical cyclone.. DPR revealed that the tallest towering thunderstorms within the strongest area of convection west of the center of circulation were reaching heights above 9.3 miles (15 km). A 3-D slice by GPM's radar through those tall storms showed heavy downpours.

At 2 p.m. EDT the National Hurricane Center or NHC posted a Tropical Storm Warning for Trinidad, Tobago, Grenada and Venezuela from Pedernales to Cumana including Isla de Margarita. A Tropical Storm Watch is in effect for Bonaire, Curacao and Aruba.

At 2 p.m. EDT (1800 UTC) the NHC update said "The disturbance was centered near latitude 8.8 North, longitude 57.8 West. The system is moving toward the west near 25 mph (41 km/h). A fast motion toward the west-northwest is expected over the next 48 hours. On the forecast track, the disturbance is expected to move through the Windward Islands and near the eastern coast of Venezuela tonight, June 19 and early Tuesday, June 20. Maximum sustained winds are near 40 mph (65 kph) with higher gusts. Some strengthening is expected during the next 48 hours, and the disturbance is forecast to be a tropical storm when it moves through the Windward Islands and eastern Venezuela tonight and Tuesday."

NHC Forecaster Chris Landsea noted "Thunderstorm activity associated with the disturbance continues to show signs of organization, and additional development is likely during the next day before the system interacts with Venezuela." The National Hurricane Center noted that this system has a high chance of being classified as a tropical storm in the next two days.

If the system is classified as a tropical storm it would be named "Bret." 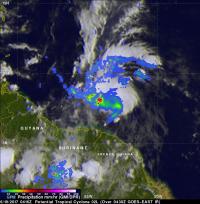