Coyotes now live across North America, from Alaska to Panama, California to Maine. But where they came from, and when, has been debated for decades. Using museum specimens and fossil records, researchers from the North Carolina Museum of Natural Sciences and North Carolina State University have produced a comprehensive (and unprecedented) range history of the expanding species that can help reveal the ecology of predation as well as evolution through hybridization. Their findings appeared in ZooKeys in May.

A video presenting these research findings is available for media usage here: https://www.youtube.com/watch?v=pLvZwWGYCRk

The geographic distribution of coyotes has dramatically expanded since 1900, spreading across much of North America in a period when most other mammal species have been declining. Although this unprecedented expansion has been well documented at the state/provincial scale, the continent-wide picture of coyote spread was coarse and largely anecdotal. A more thorough compilation of available records was needed. "We began by mapping the original range of coyotes using archeological and fossil records," says co-author Dr. Roland Kays, Head of the Museum's Biodiversity Lab and Research Associate Professor in NC State's Department of Forestry and Environmental Resources. "We then plotted their range expansion across North America from 1900 to 2016 using museum specimens, peer-reviewed reports, and game department records." In all, Kays and lead author James Hody reviewed more than 12,500 records covering the past 10,000 years for this study.

Their findings indicate that coyotes historically occupied a larger area of North America than generally suggested in the literature. Previous maps, as it turns out, had ancient coyotes only located across the central deserts and grasslands. However, fossils from across the arid west link the distribution of coyotes from 10,000 years ago to specimens collected in the late 1800s, proving that their geographic range was not only broader but had been established for hundreds, perhaps thousands of years, which also contradicts some widely-cited descriptions of their historical distribution.

It wasn't until approximately 1920 that coyotes began their expansion across North America. This was likely aided by an expansion of human agriculture, forest fragmentation, and hybridization with other species. Eastern expansion in particular was aided by hybridization with wolves and dogs, resulting in size and color variation among eastern coyotes.

Before too long, coyotes may no longer be just a North American species. Kays notes that coyotes are continually expanding their range in Central America, crossing the Panama Canal in 2010. Active camera traps are now spotting coyotes approaching the Darien Gap, a heavily forested region separating North and South America, suggesting that they are at the doorstep of South America.

"The expansion of coyotes across the American continent offers an incredible experiment for assessing ecological questions about their roles as predators, and evolutionary questions related to their hybridization with dogs and wolves," adds Hody. "By collecting and mapping these museum data we were able to correct old misconceptions of their original range, and more precisely map and date their recent expansions.

"We hope these maps will provide useful context for future research into the ecology and evolution of this incredibly adaptive carnivore."

The study abstract below.

Abstract: The geographic distribution of coyotes (Canis latrans) has dramatically expanded since 1900, spreading across much of North America in a period when most other mammal species have been declining. Although this considerable expansion has been well documented at the state/provincial scale, continent wide descriptions of coyote spread have portrayed conflicting distributions for coyotes prior to the 1900s, with popularly referenced anecdotal accounts showing them restricted to the great plains, and more obscure, but data-rich accounts suggesting they ranged across the arid west. To provide a scientifically credible map of the coyote's historical range (10,000-300 BP) and describe their range expansion from 1900 to 2016, we synthesized archaeological and fossil records, museum specimens, peer-reviewed reports, and records from wildlife management agencies. Museum specimens confirm that coyotes have been present in the arid west and California throughout the Holocene, well before European colonization. Their range in the late 1800s was undistinguishable from earlier periods, and matched the distribution of non-forest habitat in the region. Coyote expansion began around 1900 as they moved north into taiga forests, east into deciduous forests, west into costal temperate rain forests, and south into tropical rainforests. Forest fragmentation and the extirpation of larger predators probably enabled these expansions. In addition, hybridization with wolves (C. lupus, C. lycaon, and/or C. rufus) and/or domestic dogs has been documented in the east, and suspected in the south. Our detailed account of the original range of coyotes and their subsequent expansion provides the core description of a large scale ecological experiment that can help us better understand the predator-prey interactions, as well as evolution through hybridization.

How coyotes conquered the continent 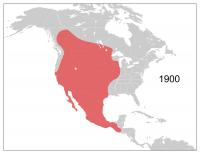