CHAMPAIGN, lll. — Researchers (and some cat-owners) wanted to know: What do feral and free-roaming house cats do when they're out of sight? A two-year study offers a first look at the daily lives of these feline paupers and princes, whose territories overlap on the urban, suburban, rural and agricultural edges of many towns.

The study used radio telemetry and a sophisticated activity-tracking device to capture the haunts and habits of dozens of owned and un-owned cats living at the southern edge of Champaign and Urbana, neighboring cities in Central Illinois. Together, the 42 adult cats originally radio-tracked for the study ranged over a territory of 2,544 hectares (6,286 acres).

Of the radio transmitters used in the study, 23 had tilt and vibration sensors that tracked the animals' every move.

"There's no (other) data set like this for cats," said Jeff Horn, a former graduate student in the University of Illinois department of natural resources and environmental sciences who conducted the study for his master's thesis with researchers from his department and the Prairie Research Institute at Illinois. "Without these sensors, it would require a field team of 10 to 12 people to collect that data."

As expected, in most cases the un-owned cats had larger territories than the pet cats and were more active throughout the year. But the size of some of the feral cats' home ranges surprised even the researchers.

One of the feral cats, a mixed breed male, had a home range of 547 hectares (1,351 acres), the largest range of those tracked.

Like most of the feral cats, this lone ranger was seen in both urban and rural sites, from residential and campus lawns to agricultural fields, forests and a restored prairie.

"That particular male cat was not getting food from humans, to my knowledge, but somehow it survived out there amidst coyotes and foxes," Horn said. "It crossed every street in the area where it was trapped. (It navigated) stoplights, parking lots. We found it denning under a softball field during a game."

The owned cats had significantly smaller territories and tended to stay close to home. The mean home range for pet cats in the study was less than two hectares (4.9 acres).

"Still, some of the cat owners were very surprised to learn that their cats were going that far," Horn said. "That's a lot of backyards."

The cats also differed in the types of territories they used throughout the year. Pet cats randomly wandered in different habitats, but un-owned cats had seasonal habits. In winter, feral cats stayed closer to urban areas than expected. And throughout the year they spent a good amount of time in grasslands, including a restored prairie.

Most of the cats in the study stayed within about 300 meters of human structures, said co-author Nohra Mateus-Pinilla, a wildlife veterinary epidemiologist at the Illinois Natural History Survey at Illinois.

"Even feral cats were always within range of a building," she said. "That shows that even though they're feral, they still have a level of dependency on us."

One feral cat chased another out of a dairy barn. Another feral cat waited for a pet cat to emerge each morning and tried to chase it out of its own backyard, Horn said.

The overlap of feral and pet cat territories outdoors spells trouble for the environment, the cats and potentially also for the cat owners, the researchers said.

In an earlier study, co-author Richard Warner, an emeritus professor of natural resources and environmental sciences at Illinois, followed the cats of about two-dozen rural residences over several years.

Cats also get diseases from wildlife or other cats, Mateus-Pinilla said, and can bring them home and infect their owners and other pets.

"For example, Toxoplasma gondii, a parasite spread primarily by cats, may cause neurological, reproductive and even respiratory problems in humans, cats and wildlife, depending on the species affected," she said. Rabies, cat scratch fever, feline leukemia and feline immunodeficiency virus are also of concern to pet owners whose cats encounter other cats outdoors, she said. Vaccination of pet cats will reduce but not eliminate the threat of disease transmission, she said.

Even though pet cats have relatively small ranges and are active only in short bursts, Warner said, their impact on wildlife in the immediate vicinity of their homes is likely much more intense than that of a feral cat that wanders over a larger territory.

Unlike other feline predators, such as bobcats, that are native to the Midwest, domestic cats are invasive species that have a disproportionately damaging effect on wildlife – either through predation or disease, Horn said.

Wild animals that have adapted to ecosystems that are already fragmented, such as the prairies of Central Illinois, are even more endangered because domestic cats are disrupting the ecosystem by hunting, competing with native predators or spreading disease, he said.

The survey is a unit within the Prairie Research Institute. This study was funded by the survey, the department of natural resources and environmental sciences and U. of I. Extension.

The paper, "Home Range, Habitat Use, and Activity Patterns of Free-Roaming Domestic Cats," is available online or from the U. of I. News Bureau. 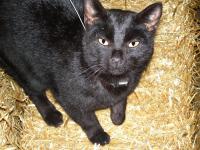