When NASA's Aqua satellite passed over Tropical Cyclone Dineo in the Mozambique Channel on Feb. 15, the storm was centered just off the coast of Mozambique and moving toward landfall.

On Feb. 14, when the Global Precipitation Measurement mission or GPM core observatory satellite flew over Dineo at 0926 UTC (4:26 a.m. EST) and found very heavy precipitation in bands of thunderstorms on Dineo's northeastern side. The most intense rainfall was measured by GPM's Dual-Frequency Precipitation Radar (DPR) falling at a rate of over 132 mm (5.2 inches) per hour in the intense storms in the northeastern quadrant of the tropical cyclone.

On Feb. 15 at 1500 UTC (10 a.m. EST) Tropical Cyclone Dineo's maximum sustained winds were near 80.5 mph (70 knots/129.6 kph). Dineo appears to have reached its peak strength, according to the Joint Typhoon Warning Center. Dineo was located near 23.5 degrees south latitude and 35.8 degrees east longitude, about 235 nautical miles west-southwest of Europa Island, and just off the coast of Mozambique.

Dineo was moving to the west-southwest and the eye is expected to make landfall by 2100 UTC (4 p.m. EST).

After making landfall in southern Mozambique Dineo is forecast to move west and weaken quickly. 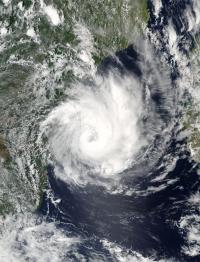