Scientists may have just made the breakthrough of a lifetime, turning discarded fruit peels and other throwaways into cheap, clean fuel to power the world's vehicles.

University of Central Florida professor Henry Daniell has developed a groundbreaking way to produce ethanol from waste products such as orange peels and newspapers. His approach is greener and less expensive than the current methods available to run vehicles on cleaner fuel – and his goal is to relegate gasoline to a secondary fuel.

Daniell's breakthrough can be applied to several non-food products throughout the United States, including sugarcane, switchgrass and straw.

"This could be a turning point where vehicles could use this fuel as the norm for protecting our air and environment for future generations," he said.

Daniell's technique – developed with U.S. Department of Agriculture funding -- uses plant-derived enzyme cocktails to break down orange peels and other waste materials into sugar, which is then fermented into ethanol.

There's also an abundance of waste products that could be used without reducing the world's food supply or driving up food prices. In Florida alone, discarded orange peels could create about 200 million gallons of ethanol each year, Daniell said.

More research is needed before Daniell's findings, published this month in the highly regarded Plant Biotechnology Journal, can move from his laboratory to the market. But other scientists conducting research in biofuels describe the early results as promising.

"Dr. Henry Daniell's team's success in producing a combination of several cell wall degrading enzymes in plants using chloroplast transgenesis is a great achievement," said Mariam Sticklen, a professor of crop and soil sciences at Michigan State University. In 2008, she received international media attention for her research looking at an enzyme in a cow's stomach that could help turn corn plants into fuel.

Daniell said no company in the world can produce cellulosic ethanol – ethanol that comes from wood or the non-edible parts of plants.

Depending on the waste product used, a specific combination or "cocktail" of more than 10 enzymes is needed to change the biomass into sugar and eventually ethanol. Orange peels need more of the pectinase enzyme, while wood waste requires more of the xylanase enzyme. All of the enzymes Daniell's team uses are found in nature, created by a range of microbial species, including bacteria and fungi.

Tobacco was chosen as an ideal system for enzyme production for several reasons. It is not a food crop, it produces large amounts of energy per acre and an alternate use could potentially decrease its use for smoking.

Daniell joined UCF's Burnett School of Biomedical Sciences in 1998. His research led to the formation of the university's first biotechnology company. Daniell became only the 14th American in the last 222 years to be elected to the Italian National Academy of Sciences, and he is a fellow of the American Association for the Advancement of Sciences.

UCF Stands For Opportunity --The University of Central Florida is a metropolitan research university that ranks as the 3rd largest in the nation with more than 53,500 students. UCF's first classes were offered in 1968. The university offers impressive academic and research environments that power the region's economic development. UCF's culture of opportunity is driven by our diversity, Orlando environment, history of entrepreneurship and our youth, relevance and energy. For more information visit http://news.ucf.edu. 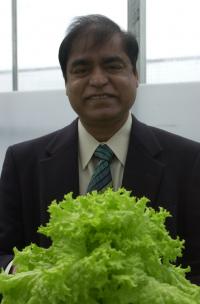 Henry Daniell,University of Central Florida (2 of 2)