Gold mining in California in the 19th century was a boon for the state's economy but not so much for the environment. Mining left a protracted legacy that impacts the natural landscape even today. Mercury, used in the gold extraction process, has been detected throughout the Lower Yuba/Feather River system in the state's Central Valley, and its presence could prove dangerous to local wildlife.

That mercury, which will remain in dry river sediment for thousands of years, generally poses a problem only when exposed to extreme water conditions. Flooding triggers a process called methylation, which causes a portion of the mercury to become toxic. When ingested by wildlife, this so-called methylmercury can negatively affect cardiovascular and central nervous systems.

A new study by UC Santa Barbara researchers Michael Singer, Lee Harrison and colleagues from the University of Michigan has identified how flooding frequency and duration affect mercury biogeochemistry along a 40-mile stretch of the Yuba/Feather River system. They found that about 5 percent of the total mercury in this lower section has the potential to become toxic. Their research appears in the journal Science of the Total Environment.

"First of all, it was really striking to find a riverine aquatic ecosystem exposed to mercury with no sign of any permanent wetlands nearby," said Singer, an associate researcher at UCSB's Earth Research Institute. "We had always thought mercury had to reach a big wetland area before significant methylation could occur, but our work indicates that this is not the case. It's important to note that most of the time this area is totally dry so no methylation occurs -- which underscores the importance of flood events as the hot moments of methylation."

In addition to demonstrating that the ecosystem's fauna have significant levels of toxicity in their tissues, the study identified the spatial patterns of flooding capable of triggering mercury methylation.

"This work really allows us to visualize the landscape as a whole unit, rather than just studying one small plot, and points out how potential toxicity varies in space over several decades," Singer explained. "This is controversial because people aren't used to thinking about this kind of problem at the landscape scale and over timescales.

"Our modeling estimated methylmercury concentrations that are quite high, so the science community could be very shocked by the degree of mercury methylation that could be possible," Singer continued. "However, not all of this mercury will enter Central Valley food webs. Much of it will be converted back to a nontoxic form by bacteria."

The presence of a certain community of bacteria is necessary in order to convert mercury into a toxic form that can be absorbed into the ecosystem. However, those bacteria don't operate without water and only under conditions of low oxygen. Floodwaters push out air from the pore spaces in between sediment grains in the floodplains where oxygen in stagnating water is quickly consumed. As a result, a low-oxygen condition triggers the bacteria to methylate mercury in the sediments.

Singer's team used historical flow record from the U.S. Geological Survey and an Army Corps of Engineers software platform to model the effects of flood frequency and inundation on relative amounts of methylmercury. They looked at 50 years of flood and hydrology, which represented the period since dams were installed in the system.

But frequency painted only part of the picture. The researchers also investigated the significance of consecutive days of inundation. "It wasn't enough to know that this area was flooded 50 days out of the 50-year record," Singer said. "We wanted to know whether that flooding occurred in two long floods or was spread out in 50 separate one-day floods. The longer the area was inundated, the more opportunity existed for methylation to occur."

The scientists also analyzed total mercury and methylmercury concentrations of wildlife that live along the Feather and Yuba rivers. They documented high concentrations, starting with sediment and moving into the food chain, from algae to small aquatic insects such as mayflies and caddisflies and to small forage fish that live locally.

Some scientists have proposed that the predominant origin of the methylmercury in many food webs is coal-fired power plants and other industry. However, previous research led by the University of Michigan co-authors of the current paper tracked mercury isotopes through this same river system to prove that mercury from gold mining was the plausible source of high mercury concentrations in the local food web.

Other co-authors are Patrick Donovan and Joel Blum of the University of Michigan and Mark Marvin-DiPasquale the U.S. Geological Survey. UCSB co-author Harrison is also affiliated with the National Oceanic and Atmospheric Association. This work was supported by a grant from the National Science Foundation.

Journal
The Science of The Total Environment 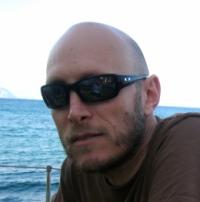