Water scarcity is slowly becoming a fact of life in increasingly large areas.

The summer of 2006 was the second warmest in the continental United States since records began in 1895, according to the National Climatic Data Center. Moderate to extreme drought conditions were evident in about 40 percent of the country.

When Constance Brown moved from Arizona to Indiana two years ago, she was struck by a major difference: people in Indiana don't think about water every day the way people in Arizona do.

In Arizona, she said, if you need a particular garment on short notice and it's in the laundry, you can wash it by hand and hang it outside. It will be dry in 15 minutes. Not in Indiana.

In semi-arid environments such as the southwestern United States, humidity is so low that water is scarce to begin with and hard to hold onto when there is a rare cloudburst. Rain that collects in puddles is quickly sucked up by evaporation into the dry air. Most of the rest runs off before it can soak into the ground. Maintaining an adequate supply of water is a constant challenge, and water management is a top priority.

One way to make better use of scarce water resources would be to retain more of the water that falls during a heavy rain. To accomplish this, better understanding is needed about how water behaves in the environment. Brown, a micrometeorologist in the Atmospheric Science Program of Indiana University's Department of Geography, is one of the scientists working to provide this understanding. Her research is primarily funded by the National Science Foundation.

In a forthcoming paper in the Journal of Arid Environments, which is available on the Web at http://authors.elsevier.com/offprints/YJARE1769/0dee34d6306f9059b870583e03a193bd, she reports the first results of a study designed to characterize the surface exchanges of water and carbon dioxide in a forest in the Santa Catalina Mountains near Tucson, Ariz. Mountain forests are an important source of water for the rest of such semi-arid regions, and these forests provide relatively isolated conditions where scientists can get a clearer picture of what is happening to the water that so many people depend on. In a desert region, such forests are found only at the tops of mountains because only there does precipitation exceed evaporation enough for forest vegetation to survive.

Understanding surface-atmosphere interactions is important to understanding a range of water resource phenomena including predictions about water supplies, Brown said. "This research seeks to characterize the explicit relationship between water availability and photosynthetic activities of the vegetation. This paper is the first step in that process, and it illustrates the seasonal characteristics of the forest vegetation-water relationship as observed during a three-year period during which there were extreme drought conditions in the semi-arid southwestern United States."

Brown's measurements showed that in this environment, there is a predominant, direct and immediate correspondence between water availability and photosynthetic activity of the vegetation. This is different from what happens in most coniferous forests, where the seasonal behavior of the trees is significantly influenced by temperature changes: the trees are largely dormant in winter and have a summer growing season. The mountain-top forest that she studied was in some ways the opposite.

"During the summer season before the heavy rains, when almost all the winter precipitation had been evaporated and the soil was extremely dry, the trees essentially closed down," she said. "This behavior suggests that the trees have little ability to access any moisture present in bedrock fractures. Because a late spring/early summer period without any rain is very common in southern Arizona, the mountain forest must have evolved the capability to survive it. The rapid recovery of this forest when heavy rains begin confirms the tight coupling between the trees and the available soil moisture."

In short, winter has a significant impact on the primary growing season for these mountain trees, because moisture is continually available from rain or snow, the tree root zones don't freeze, and there is enough sunlight for photosynthesis. The trees slow down during the pre-monsoon dry season in May and June when water is scarce, and then quickly respond to the sudden availability of water at the onset of the monsoon in July.

As unlikely as it may seem, Arizona does experience a monsoon every summer. Certain roads have yellow warning signs posted -- "Do Not Cross When Flooded." Though these signs may seem out of place in the middle of a desert, they have a serious purpose. In Arizona, as in other regions of the world such as India, residents must cope with a season of high temperatures, high winds and high moisture, resulting in potentially deadly weather.

The Arizona monsoon usually begins around July 7 and continues for the next two months, resulting in about one-third of the region's yearly rainfall. The monsoon varies from year to year in starting date, duration and intensity.

"The semi-arid forest ecosystem adapts to the extremes in the annual cycle of water availability by its ability to remain turned on during the winter," Brown said. "Water stress, rather than temperature, is the primary control on the forest's behavior. The trees will remain significantly active regardless of the season, providing they have access to moisture."

It remains to be seen whether coniferous forests at lower elevations in the western United States will be able to do the same if they are confronted with prolonged water scarcity. 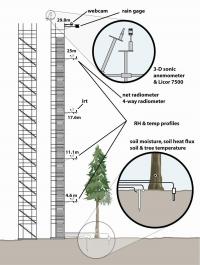 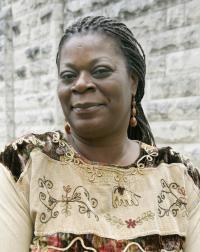