SAN FRANCISCO, Sept. 12 -- Food scientists from the Peoples' Republic of China report a biochemical explanation for the Black-Bone Silky Fowl's 1,000-year-old reputation as a marvel of traditional Chinese medicine. The study is scheduled for presentation at the 232nd national meeting of the American Chemical Society, being held here this week.

One odd bird, indeed, this chicken sports an abundance of snow-white feathers that feel as smooth as silk. Underneath is black-colored skin, black meat and -- you guessed it -- black bones.

The Black-Bone Silky Fowl is a special bird in China, explained Mingyong Xie, Ph.D., of the Key Laboratory of Food Science of the Ministry of Education at Nanchang University in Nanchang. Xie and colleagues conducted the study.

"As a kind of folk invigorant and a source of traditional Chinese medicine, it [the chicken] is used to reinforce body immunity and protect from emaciation and feebleness," added co-researcher Ying-gang Tian in an interview. It also treats diabetes, anemia, menstrual cramps and postpartum disorders, according to Tian.

While looking for an explanation for the bird's reputed medical abilities, which date to at least the early 1000s A.D., Xie's group began to wonder whether carnosine, a naturally occurring peptide, might be partly responsible. Carnosine may be most familiar in the West as a dietary supplement. People take carnosine supplements in the hope of increasing muscle strength, warding off the effects of aging and alleviating diseases such as autism and diabetes.

Knowing that meat and poultry are good natural sources of carnosine, Tian searched for existing studies on the carnosine content of Black Bone Silky Fowl, but found that none had been done. His group decided to use a standard laboratory instrument -- high-pressure liquid chromatography (HPLC) -- to fill that information gap.

They analyzed and compared carnosine levels in Black-Bone Silky Fowl and White Plymouth Rocks -- "common" chickens that come in a range of colors and are one of the world's most popular for eggs and meat. The research involved developing a method for using HPLC to analyze carnosine in chicken, boning and grinding the meat from 200 Black-Bones and 200 Rocks, and then testing the samples.

So far, Chinese farmers export only small quantities of Black-Bone Silky Fowl, and those birds go mainly to southern Asia and Japan, Tian said. Tian hopes the ACS report will increase awareness about this odd bird in the United States, and eventually put Black Bones on fast food and home menus.

If that happens, consumers can look forward to clucking over a tastier and perhaps healthier chicken, with only one blip on the horizon: "The taste of Black-Bone Silky Fowl is usually better than other kinds of chicken," Tian pointed out, "but its unusual color -- black meat -- make some people hesitate to eat."

Mingyong Xie, Ph.D., and Ying-gang Tian, Ph.D., are with Nanchang University in the People's Republic of China. Xie is director of the university's Key Laboratory of Food Science and vice president of the university.

Black-Bone Silky Fowl: An odd bird with meat to crow about 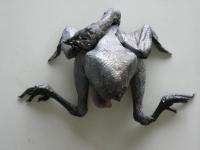