This press release is available in French.

A young exoplanet, orbiting a star known as HR 8799, has water and carbon monoxide in its atmosphere—but not methane—researchers say. Their findings suggest that a particular planet-forming mechanism, known as core accretion, brought the exoplanet, called HR 8799c, into existence.

HR 8799c is a gas giant, with about seven times the mass of Jupiter, and astronomers have been debating whether similar planets form via this core accretion process or by another possible mechanism, known as gravitational instability.

Quinn Konopacky from the Dunlap Institute for Astronomy and Astrophysics at the University of Toronto, along with colleagues from Canada and the United States, used data from the Keck Observatory in Hawaii to analyze the spectral features of HR 8799c. Their results, published in the 14 March issue of Science Express, shed light on the formation of this faraway gas giant and provide clues about the formation of our own Solar System as well.

"Our results are most consistent with the planets around HR8799 forming via core accretion, much in the same way we think the planets in our own Solar System formed," explained Konopacky. "By studying the HR8799 system, we can get a peek at how Jupiter-like planets look very shortly after they form."

Unlike most other exoplanets, the four planets orbiting HR 8799 were detected directly, meaning that their light was discernible from that of their host star. This direct detection indicated that HR 8799c was a gas giant, orbiting its star at a distance comparable to Pluto's distance from our Sun. But, the birth of such a massive planet so far away from its parent star conflicted with popular models of planetary formation.

The new analysis by Konopacky and her team provides high-resolution data on the chemistry, gravity and atmosphere of HR 8799c. "The exoplanet has an ideal set of properties, being both fairly bright and located far enough away from the star to allow us to acquire this amazing spectral data," explained the researcher. "The fact that we don't see methane tells us a lot about the chemical processes at work in the atmosphere of this young gas giant."

Two possible mechanisms have been proposed for exoplanet formation: a multi-step, core accretion process by which gas slowly accumulates onto a planetary core, and a process known as gravitational instability that involves the simultaneous creation of a planet's interior and atmosphere.

"Although we see a lot of water vapor in the atmosphere of HR 8799c, we actually detect slightly less than we would have expected if the planet had the same composition as its host star," said Konopacky. "This tells us that the planet has a slightly elevated amount of carbon compared to oxygen."

The elevated carbon-to-oxygen ratio acts as a fingerprint for the exoplanet's formation, and the researchers suggest that grains of water ice must have condensed in the planetary disk surrounding HR 8799 and depleted the oxygen.

"These ice grains stuck together to make bigger ice chunks, a few kilometers across, that kept colliding and building up the planet's solid core," Konopacky suggested. "The atmosphere came later—from gas that the planet attracted after it got big enough. By the time that happened, some of the ice grains were gone and the gas didn't have as much water in it."

These findings imply that a core accretion process, similar to the one that shaped our Solar System—with gas giants far away from the Sun and rocky planets closer to it—also led to the formation of HR 8799c.

"Since the planetary system surrounding HR8799 looks like a scaled up version of our Solar System, it would not come as a surprise to find Earth-like planets closer in," according to the researchers.

The report by Konopacky et al. was supported by the U.S. Department of Energy, NASA and the Keck Principal Investigator Data Analysis Fund.

The American Association for the Advancement of Science (AAAS) is the world's largest general scientific society, and publisher of the journal, Science (http://www.sciencemag.org) as well as Science Translational Medicine (http://www.sciencetranslationalmedicine.org) and Science Signaling (http://www.sciencesignaling.org). AAAS was founded in 1848, and includes some 261 affiliated societies and academies of science, serving 10 million individuals. Science has the largest paid circulation of any peer-reviewed general science journal in the world, with an estimated total readership of 1 million. The non-profit AAAS (http://www.aaas.org) is open to all and fulfills its mission to "advance science and serve society" through initiatives in science policy; international programs; science education; and more. For the latest research news, log onto EurekAlert!, http://www.eurekalert.org, the premier science-news Web site, a service of AAAS.

Exoplanet's spectrum hints at its origin 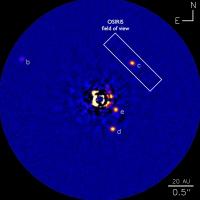