Scientists from the University of Leicester have played a key role in a momentous discovery about the origins of 'ghostly' particles from the distance universe that bombard Earth from billions of light years away.

The Leicester team from the Department of Physics & Astronomy are part of a global network of researchers that have helped to resolve a more than century-old riddle about what sends subatomic particles such as neutrinos and cosmic rays speeding through the universe. Their results are published today.

Because most cosmic rays are charged particles, their paths cannot be traced directly back to their sources due to the magnetic fields that fill space and warp their trajectories. But the powerful cosmic accelerators that produce them will also produce neutrinos. Neutrinos are uncharged particles, unaffected by even the most powerful magnetic field. Because they rarely interact with matter and have almost no mass--hence their sobriquet "ghost particle"--neutrinos travel nearly undisturbed from their accelerators, giving scientists an almost direct pointer to their source.

Two papers published this week (July 13, 2018) in the journal Science have for the first time provided evidence for a known blazar as a source of high-energy neutrinos detected by the US National Science Foundation-supported IceCube observatory. This blazar, designated by astronomers as TXS 0506+056, was first singled out following a neutrino alert sent by IceCube on Sept. 22, 2017.

A blazar is a giant elliptical galaxy with a massive, rapidly spinning black hole at its core. A signature feature of blazars is that twin jets of light and elementary particles, one of which is pointing to Earth, are emitted along the axis of the black hole's rotation. This blazar is situated in the night sky just off the left shoulder of the constellation Orion and is about 4 billion light years from Earth.

Equipped with a nearly real-time alert system--triggered when a very high-energy neutrino collides with an atomic nucleus in the Antarctic ice in or near the IceCube detector--the observatory broadcast coordinates of the Sept. 22 neutrino alert to telescopes worldwide for follow-up observations. Scientists from Leicester were involved in the observations by the Neil Gehrels Swift Observatory in orbit and the H.E.S.S. gamma-ray telescope in Namibia. The Swift observations confirmed the contemporary flaring of the blazar.

Professor Paul O'Brien, Head of Physics & Astronomy at Leicester, is a member of the observing collaboration using the H.E.S.S. ground-based gamma-ray telescopes. He said: "Neutrinos rarely interact with matter. To detect them at all from the cosmos is amazing, but to have a possible source identified is a triumph. This result, will allow us to study the most distant, powerful energy sources in the universe in a completely new way."

Professor Julian Osborne who leads the Swift project at Leicester said: "Swift is the pre-eminent space observatory for quickly following up on exciting discoveries, whether made on-board or elsewhere. The Swift X-ray camera, provided by the University of Leicester, is ideal for identifying the most energetic events. Swift was designed to make rapid-reaction observations of bursts of gamma-rays from the distant universe, and this new type of satellite autonomy allows great flexibility to chase both gravitational wave and neutrino sources."

Dr Phil Evans, Swift Development Scientist, added: "We have had, for many years, programmes to search for electromagnetic counterparts to neutrinos detected by IceCube, and much of the work for this has been developed at Leicester, led by myself. When this neutrino detection occurred, we began observing the area with Swift just 3.2 hours after the neutrino, and we reported a number of X-ray objects, including TXS 0506+056, providing the first identification of this as a BL-Lac type blazar within the IceCube error region."

"Being able to combine light with these other messengers like neutrinos gives us powerful new ways to study the cosmos. This event -- the first time we've been able to associate light with the source of a high-energy neutrino -- occurred less than 5 weeks after the first joint detection of light and gravitational waves, another game-changing discovery that I and the University of Leicester were at the heart of. We truly are entering the era of multi-messenger astronomy."

Dr Evans said so-called multi-messenger astronomy, that is, combining traditional light-based astronomy with other, new tools like neutrino or gravitational wave astronomy, is a new, exciting, and fast-moving field with great power to give researchers new scientific insights into the way the universe works.

"We have specialised in the science of explosive and variable objects in space for very many years. Our specific involvement in this case arose because of my work to produce reliable, fast, automated analysis of X-ray data from the Swift X-ray Telescope, which I adapted to search for X-ray counterparts to neutrino events."

Dr Evans said Swift was used to carry out extensive observations of the blazar, the results of which, also released today, will be published in the Astrophysical Journal.

"We continue to search for counterparts to neutrino detections, to understand whether all such events come from blazars like this one, or whether there is a diversity of celestial objects can produce such highly energetic neutrinos."

The Neil Gehrels Swift Observatory is managed by NASA Goddard Space Flight Center, the mission operations center is run by Penn State University in the US. The University of Leicester provided the camera for the X-ray Telescope, and now operates the UK Swift Science Data Centre at http://www.swift.ac.uk. Swift partners include the UCL Mullard Space Science Laboratory in the UK, and the Italian Space Agency and Brera Observatory in Italy. Funding for Swift in the UK is provided by the UK Space Agency. 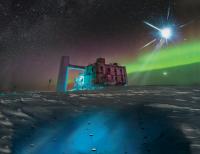 The IceCube Lab at the South Pole with Aurora