Droplets and exhaled breath caught from the blowholes of killer whales along the Pacific coast are providing scientists with insights into whale health and revealing bacteria and fungi that may be a threat to the mammals.

"We wanted to find out what sort of bacteria and fungi represent in healthy whales and the potential pathogens they are being exposed to in their environment," said Stephen Raverty, the lead author on the study and an adjunct professor at UBC's Institute for the Oceans and Fisheries. "In some circumstances, these pathogenic microbes could pose a threat to the animals and contribute to clinical disease."

A group of fish-eating killer whales, known as southern resident killer whales, are an endangered species that live in the Pacific Ocean off the coast of California north to the Salish Sea off the western coast of British Columbia. Over the course of one decade in the 1990s, their numbers dropped from about 108 animals to about 70. Some of the threats to whales include changes to their habitat like increased shipping traffic, noise, contaminants, and less prey. But these factors alone do not explain why the whale population hasn't recovered.

This latest effort gives scientists a look at the microbiome of the large mammals. The findings can be used as a baseline to compare how the health of whales change over time, especially when there is evidence of disease.

Raverty and his colleagues found bacteria and fungi in the whales that cause disease in humans and land-based animals including Salmonella, Staphylococcus aureus and fungi such as Penicillium, and Phoma, among others. These results were compared to the microbial pathogens that Raverty and his colleagues are finding in whale autopsies, also known as necropsies, of stranded killer whales in the region.

"We're not sure if these microbes naturally occur in the marine environment or if they may be terrestrially sourced," said Raverty. "These animals are long ranging and as they migrate along the coast, they are exposed to agricultural runoff and urban discharge which may introduce a variety of microbes into the water."

Researchers also found evidence of antibiotic resistance in some of the bacteria, possibly related to human activities in coastal regions and in the marine habitat.

"Assessing whether animals are healthy or sick is virtually impossible to do for live animals as big as whales," said Andrew Trites, director of the Marine Mammal Research Unit at UBC who was not involved in the study. "Raverty and his colleagues found a way to assess health by collecting microbiota and pathogens when the whales exhaled between dives. It is an ingenious way to give whales a checkup."

The research was a collaboration with colleagues at the University of Victoria in B.C. and the National Oceanic and Atmospheric Administration, National Marine Mammal Foundation and Marine Mammal Research Associates in the U.S. It was supported by the Natural Sciences and Engineering Research Council (NSERC). 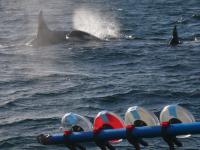