CHAMPAIGN, lll. — A farmer in Niger learns how to protect his crops from insects. A resident of Port-au-Prince or a rural Haitian village learns how to avoid exposure to cholera. An entrepreneur in Mali gets step-by-step instructions on extracting the oil from shea seeds to make shea butter she can sell at a local market.

These people are benefiting from a new approach to sustainable development education that reaches a much larger audience than traditional methods – and at a fraction of the cost. The initiative, led by a team of extension educators and faculty at the University of Illinois, produces animated educational videos that people around the world can watch at home, over and over again, on their cell phones.

"This is a very different paradigm from some other current development projects, where U.S.-based educators are flown to another part of the world, interact with people in the field for a few weeks to several months, and leave," said University of Illinois entomology professor Barry Pittendrigh, a member of the team that is developing the animations. "From a financial perspective, this is a much cheaper way to do international development." (Watch a video about the project.)

The initiative, Scientific Animations Without Borders, takes advantage of the widespread availability of cell phones in the developing world. According to recent research, nearly 60 percent of the 2.4 billion cell phone users in the world live in developing countries.

As of 2006, more than 150 million cell phone users lived in Africa, for example, with cell phone technology spreading faster there than anywhere else in the world.

Animation reduces the costs associated with making a video on a particular topic, and allows the videos themselves to have near-universal appeal. The videos are narrated, and the narration can be recorded in any language with any dialect or accent.

"The way these animated videos are designed, they can be easily adapted to other cultures," said Julia Bello-Bravo, a University of Illinois field extension specialist and leader of the project. "We are also capturing indigenous knowledge and putting it into the video, so when they see the video it is familiar to them."

The first animated videos developed by the Illinois team (with funding from the Dry Grain Pulses CRSP - U.S. Agency for International Development and created in collaboration with aid workers and farmers in West Africa) demonstrate safe insect-control methods that are already in use in some regions. The scientifically validated techniques make use of local plants or widely available materials – such as black plastic sheets, ashes, or plastic bags – to control or eradicate insect pests from cowpeas, a staple in many parts of Africa, Asia, and Central and South America.

In one video, a farmer processes the fruits of the neem tree (Azadirachta indica) to make a liquid insecticide that he sprays on his cowpea crop. The neem is a drought-tolerant tree found in Southeast Asia and parts of Sub-Saharan Africa. Farmers working with extension educators in West Africa developed the methods depicted in the video, Bello-Bravo said. Scientific studies had validated the methods and the materials needed were cheap and widely available, she said. But explaining the technique to large numbers of people would be difficult and costly.

"In Mali they are using this technique and it's very effective, but in Burkina Faso, for example, there are not many people using this technique," she said. "If we can show these animated videos in different parts of West Africa where this tree grows, we can get the information to many, many more people."

A newer video demonstrates how to boil or treat water to avoid exposure to cholera. This video is available in English, French, Haitian Creole and other languages.

The process of producing the videos is fairly fast and cheap. Communicating primarily via e-mail, aid workers, farmers, entrepreneurs and an animator collaborate on the videos with the Illinois team. Once the content is approved, the collaborators produce two scripts: one to be read by a narrator and the other describing the actions the animated character is to perform. The animator builds the animation in stages with input from the collaborative team. Once a video is complete, the voice-over narration can be swapped out to match that of a particular country or region.

In this way, the team is building a library of educational videos that can be distributed around the world via e-mail or through the sustainable development website, SusDeViki.

Future videos will touch on other agricultural or health issues, such as bed bugs, lice or malaria, and will target viewers in the developed and developing world. 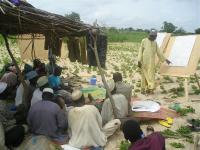