Plastics are among the most successful materials of modern times. However, they also create a huge waste problem. Scientists from the University of Groningen (The Netherlands) and the East China University of Science and Technology (ECUST) in Shanghai produced different polymers from lipoic acid, a natural molecule. These polymers are easily depolymerized under mild conditions. Some 87 per cent of the monomers can be recovered in their pure form and re-used to make new polymers of virgin quality. The process is described in an article that was published in the journal Matter on 4 February.

A problem with recycling plastics is that it usually results in a lower-quality product. The best results are obtained by chemical recycling, in which the polymers are broken down into monomers. However, this depolymerization is often very difficult to achieve. At the Feringa Nobel Prize Scientist Joint Research Center, a collaboration between the University of Groningen and ECUST, scientists developed a polymer that can be created and fully depolymerized under mild conditions.

'We found a way to produce polymers from the natural molecule lipoic acid in a very controlled way,' explains Ben Feringa, Professor of Organic Chemistry at the University of Groningen. 'It is a beautiful molecule and a perfect building block that was created by nature.' The molecule has a ring structure that includes a sulphur-sulphur bond. When this bond is broken, the sulphur atoms can react with those of another monomer. 'This process was known before, but we managed to find a way to control it and to create long polymers.'

The molecule also has a carboxyl group, which readily reacts with metal ions. These can crosslink the polymers, which results in an elastic material. By dissolving the molecule in water with sodium hydroxide and then evaporating the water, a firmer polymer film is produced through ionic bonds. As the polymerization is achieved through reversible bonds, the material is also self-healing, explains Feringa: 'When it is cut, you can simply press the ends together and they will reconnect in a few minutes.'

Fully reversible Most of the work in the Materials paper was carried out by Qi Zhang, first as a PhD student at ECUST in Shanghai and later as a postdoctoral researcher at the University of Groningen. 'Lipoic acid is a natural small molecule with an elegant structure,' he says. 'We didn't have to do any tedious re-designing of the monomer to achieve a fully reversible polymerization.' Simply exposing the polymers to sodium hydroxide dissolves the polymers into monomers. 'By adding a little acid, the monomers precipitate and can be recovered. The quality of these recycled monomers is identical to that of the original material.'

'Our experiments show what is possible with these monomers,' adds Feringa. 'We can even recycle the material into monomers several times, without loss of quality.' However, industrial applications of this new polymer are a long way off. Feringa: 'This is a proof of principle. We are conducting experiments now to create polymers with new functionalities and to better understand the polymerization and depolymerization processes.' Furthermore, although 87 per cent of the monomers can already be recovered, the scientists want to get as close to a hundred per cent as possible. 'Our experiments show that we can produce, in a controlled fashion, hard and soft, elastic polymers that can be fully depolymerized,' Feringa sums up. 'This molecule is really very promising.'

Plastics are made of long molecules called polymers. These polymers are chains of smaller building blocks, the monomers. A problem with the recycling of plastics is that the polymers must be broken down into monomers. This depolymerization often reduces the quality of the monomers. Scientists from China and the Netherlands have now found a way to produce polymers (plastics) from a natural monomer called lipoic acid. These polymers can be broken down under mild conditions without a loss of quality. Some 87 per cent of the monomers can be recovered and then reused several times over. This shows that it is possible to create fully recyclable plastics. 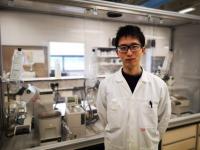