One of the reasons ticks spread Lyme disease so well goes back to a unique evolutionary event. Researchers reporting in the journal Cell on December 10 have discovered that an antibacterial enzyme in ticks, Dae2, protects them from bacteria found on human skin, while still allowing them to harbor Borrelia burgdorferi, the bacterium that causes Lyme disease. Ticks acquired the gene for this enzyme 40 million years ago from an unknown species of ancient bacteria through horizontal gene transfer.

"Bacteria exchange DNA with each other all the time, but what's remarkable is that 40 million years ago a gene in bacteria jumped across kingdoms all the way into ticks," says senior author Seemay Chou, a professor of biochemistry at University of California San Francisco. "The ticks effectively stole a page out of the bacteria's playbook, repurposing their arsenal to use against them."

The relationship between ticks and the Lyme bacterium is an example of symbiosis, where two species live in harmony with one another, and often, one organism benefits from the other without harming it. But Chou's team found that ticks have a more adversarial relationship with with bacteria found on human skin, and ticks use Dae2 - the enzyme stolen from ancient bacteria - as a defense agent to keep them safe.

Because the ticks are so well protected against human skin bacteria, they can spread Lyme disease far and wide. However, without Dae2, the whole system falls apart.

"When we blocked the enzyme, we found that ticks were actually dying from these bacteria." says Chou. "The word 'pathogen' is used in our language to describe a bacteria as 'bad' as opposed to 'good,' but in reality, 'pathogen' is referring to a very specific context rather than in intrinsic identity"

The Dae2 defense strategy against human skin microbes was a surprise for the researchers, who had spent several years unsuccessfully testing the toxic enzyme against Borrelia burgdorferi. While they found that the Lyme pathogen could stimulate ticks to produce Dae2, the enzyme didn't kill it.

"Dae2 seemed to have a mild effect on Borrelia, but nothing like we'd expect. Then a few of my colleagues bet me on a hunch that it would work better against skin bacteria. I lost that bet," Chou says. "It was astounding how fast it worked."

The net result is a well-honed biochemical system that benefits ticks and B. burgdorferi alike. The findings support a growing idea among biologists that the key to controlling tick-borne diseases may be controlling the ticks themselves, not just treating the diseases. This is what the research team is exploring next.

"There are all these old studies that show that tick saliva directly enables disease transmission, so now we're really interested in digging into some of the mechanics underlying that," says Chou. "We've also started to look more closely at the bite site itself. That's basically ground zero for all these different interactions."

So while ticks are currently winning the evolutionary war against bacteria and humans, there remains a whole battleground yet to be explored.

"The beautiful thing about vector biology is that it's like a huge puzzle that we're slowly piecing together to understand how it fits into one big picture," Chou says. "Solving this puzzle is an important step toward the longer-term goal of preventing the spread of debilitating diseases like Lyme."

This work was supported by the National Institutes of Health, Research Councils UK, the Chan Zuckerberg Biohub, and the Howard Hughes Medical Institute 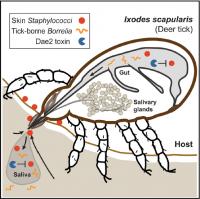