Vampire bats that share food and groom each other in captivity are more likely to stick together when they're released back into the wild, find researchers in a study reported on October 31 in the journal Current Biology. While most previous evidence of "friendship" in animals comes from research in primates, these findings suggest that vampire bats can also form cooperative, friendship-like social relationships.

"The social relationships in vampire bats that we have been observing in captivity are pretty robust to changes in the social and physical environment--even when our captive groups consist of a fairly random sample of bats from a wild colony," said Simon Ripperger (@SimonRipperger) of the Museum für Naturkunde, Leibniz-Institute for Evolution and Biodiversity Science in Berlin. "When we released these bats back into their wild colony, they chose to associate with the same individuals that were their cooperation partners during their time in captivity."

He and study co-lead author Gerald Carter (@gerrygcarter) of The Ohio State University say their findings show that repeated social interactions they've observed in the lab aren't just an artifact of captivity. Not all relationships survived the transition from the lab back into the wild. But, similar to human experience, cooperative relationships or friendships among vampire bats appear to result from a combination of social preferences together with external environment influences or circumstances.

Carter has been studying vampire bat social relationships in captivity since 2010. For the new study, he wondered whether the same relationships and networks he'd been manipulating in the lab would persist or break down after their release in the wild, where the bats could go anywhere and associate with hundreds of other individuals.

Studying social networks in wild bats at very high resolution hadn't been possible until now. To do it, Simon Ripperger and his colleagues in electrical engineering and computer sciences developed novel proximity sensors. These tiny sensors, which are lighter than a penny, allowed them to capture social networks of entire social groups of bats and update them every few seconds. By linking what they knew about the bats' relationships in captivity to what they observed in the wild, they were able to make this leap toward better understanding social bonds in vampire bats.

The researchers found that shared grooming and food sharing among female bats in captivity over 22 months predicted whom they'd interact with in the wild. While not all relationships survived, the findings suggest that the bonds made in captivity weren't just a byproduct of confinement and limited options. The researcher report that the findings are consistent with the idea that both partner fidelity and partner switching play a role in regulating the bats' relationships.

"Our finding adds to a growing body of evidence that vampire bats form social bonds that are similar to the friendships we see in some primates," Carter said. "Studying animal relationships can be a source of inspiration and insight for understanding the stability of human friendships."

The researchers say they'll continue to work on individual differences in cooperativeness among vampire bats and exploring how individuals go from being strangers to cooperation partners. Taking advantage of their newfound abilities to measure relationships in the wild, they're also looking into social foraging and whether bats that cooperate within their day roost also go hunting together at night.

This work was supported by the Deutsche Forschungsgemeinschaft, a Smithsonian Scholarly Studies Awards grant, and a National Geographic Society Research Grant.

Current Biology, Ripperger and Carter et al.: "Vampire bats that cooperate in the lab maintain their social networks in the wild" https://www.cell.com/current-biology/fulltext/S0960-9822(19)31364-8

After release into wild, vampire bats keep 'friends' made in captivity 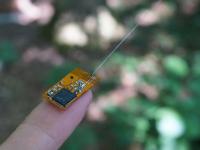 Tagged Vampire Bat in a Tree