NEW YORK, NY (Nov 25, 2015) --What doesn't kill you could cure you. A growing interest in the therapeutic value of animal venom has led a pair of Columbia University data scientists to create the first catalog of known animal toxins and their physiological effects on humans.

VenomKB, short for Venom Knowledge Base, summarizes the results of 5,117 studies in the medical literature describing the use of venom toxins as painkillers and as treatments for diseases like cancer, diabetes, obesity, and heart failure. Drawn from an automated analysis of the literature, VenomKB documents nearly 42,723 effects on the body. Though modern medicine makes use of only a small fraction of the toxins documented thus far, the researchers hope that the catalog will spur the discovery of new compounds and medical treatments.

"With this list we can take stock of what we know about venoms and their therapeutic effects" said Nicholas Tatonetti, an assistant professor of biomedical informatics at Columbia University Medical Center and a member of the Data Science Institute. "The questions now is: How can we use this information with other databases to discover new compounds and therapies?"

Tatonetti and Joseph Romano, a graduate student, searched on the term "venoms/therapeutic use" in a database of 22 million medical research papers. This produced a list of 5,117 venom-related studies whose results they summarized using a pair of computer algorithms. After cross-referencing toxins and drugs listed under multiple names and correcting other irregularities in the data, they found 42,723 unique mentions of venoms having a specific effect on the body. Their results are published in a companion study to Venom KB in the journal Scientific Data.

Venom's capacity to heal is paradoxically linked to its fast-acting, lethal effects in the wild. Found in more than 173,000 species, venoms evolved over millions of years to target molecules that are often involved in disease. The toxic proteins and amino acids known as peptides that make up venom act on cell receptors and ion channels, controlling how cells behave.

By mimicking or altering how these toxins act on specific human cells, researchers can develop drugs that inhibit pain or treat diseases, often with fewer side effects than those of drugs already on the market.

About a dozen major drugs have emerged from this strategy so far, National Geographic magazine reported in 2013. One of the first, an anticoagulant called Arvin, gained favor in the late 1960s after a doctor discovered that ancrod, a protein found in the venom of the Malayan pit viper, could treat blood clots in the legs.

The widely used type 2 diabetes drug Byetta, is made from the toxin exenatide, found in the saliva of the venomous Gila monster, a lizard native to the United States and Mexico.

Another drug, bombesin, uses a toxin found in the skin of the venomous European fire-bellied toad to treat gastrointestinal disorders. Bombesin's ability to bind to neuronal tumors has led to interest in developing a florescent version that could guide surgeons around the edges of a tumor.

Five compounds produced by the venomous cone snail have made it to clinical trials, including ziconotide, the generic term for an analgesic similar to morphine.

The Malayan pit viper, Gila monster, European fire-bellied toad, and cone snail account for about 18 percent of the 5,117 venom-related studies now catalogued in Venom KB. Yet there are 10 million or more venomous species that have yet to be studied. Zoltan Takacs, a toxinologist who earned his PhD in evolutionary studies at Columbia, estimates there are 20 million venom toxins waiting to be screened.

Venom KB got its start after Romano approached Tatonetti, his thesis adviser, about studying medicinal uses of venom. Tatonetti suggested that Romano start looking through the venom database. To their surprise there was neither a database nor a list. Still modest in size, VenomKB is expected to grow more useful as researchers contribute more data. "With a large enough library we can screen for more effective, safer compounds," said Romano.

Databases of compounds and their biological effects have been used in recent years to discover and develop new drugs as well as uncover problems with drugs already in use. Tatonetti and his colleagues mined a federal database of documented drug side effects, the FDA Adverse Event Reporting System (FAERS), and discovered that the interaction of the anti-depressant paroxetine, sold under the brand name Paxil, and the statin pravastatin, sold as Pravachol, could raise blood glucose levels in diabetic patients.

With VenomKB up and running, Tatonetti and Romano plan to contribute data of their own. Starting with samples of dried venom from the black mamba, they will perform experiments and explore new treatments for chronic pain, diabetes and heart disease.

The paper is titled, "VenomKB, a new knowledge base for facilitating the validation of putative venom therapies."

The study was supported by grants from the National Library of Medicine (T15LM007079) and the the National Institute of General Medical Sciences (R01GM107145).

The Data Science Institute at Columbia University is training the next generation of data scientists and developing innovative technology to serve society. http://datascience.columbia.edu/ 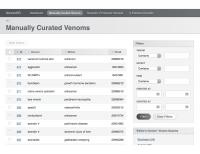