Over two days, the Global Precipitation Measurement or GPM core observatory satellite had excellent views of Tropical Cyclone Uriah in the South Indian Ocean. GPM found heavy rainfall was occurring in the storm but saw a weakening trend begin.

On Feb. 17 and 18 GPM measured rainfall and cloud heights in Uriah. On Feb. 17 Uriah was still intensifying and had maximum sustained winds of about 115 knots (132 mph) at 1651 UTC (1:51 p.m. EST) when the GPM satellite passed above. A rainfall analysis derived from GPM's Microwave Imager (GMI) and Dual-frequency Precipitation Radar (DPR) data collected with that pass revealed that Uriah had a well-defined circular eye. Rain was measured by DPR falling at a rate of over 179 mm (7 inches) per hour on the southern side of Uriah's eye wall.

GPM passed over Uriah again on Feb. 18, 2016 at 0613 UTC (1:13 a.m. EST) when the storm's maximum wind speeds peaked at 125 knots (144 mph). GPM revealed that, although wind speeds estimates were higher than the previous day the tropical cyclone was starting to deteriorate. The northern side of the eye wall contained very little rainfall. Rain was falling at a rate of over 137 mm (5.4 inches) south of Uriah's center.

GPM's Radar (DPR ku Band) were used to examine the 3-D structure of precipitation within the storm on both Feb. 17 and Feb. 18. At NASA's Goddard Space Flight Center in Greenbelt, Maryland 3-D image was created. That 3-D cross section showed radar reflectivity values of over 45 dbz (decibels relative to Z) in the southern side of Uriah's well-structured eye wall. GPM's radar instrument found little rainfall structure in the northern side of the eye wall with today's view (looking toward the south).

The Global Precipitation Measurement or GPM core observatory satellite is co-managed by both NASA and the Japan Aerospace Exploration Agency.

The Joint Typhoon Warning Center (JTWC) forecast calls for Uriah to continue to move south and weaken quickly under increasing vertical wind shear and over cooler sea surface temperatures. JTWC expects Uriah to weaken to a depression by Feb. 21. 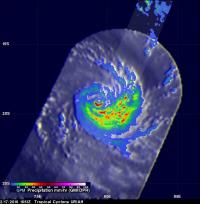 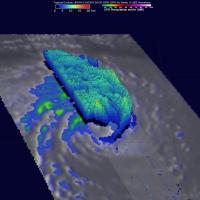