We might refer to someone's personality as "mousey," but in truth, mice have a range of personalities nearly as great as our own. Prof. Alon Chen and members of two groups he heads - one in the Weizmann Institute of Science's Neurobiology Department and one in the Max Planck Institute of Psychiatry in Munich, Germany - decided to explore personality specifically in mice. This would enable them to develop a set of objective measurements for this highly slippery concept. A quantitative understanding of the traits that make each animal an individual might help answer some of the open questions in science concerning the connections between genes and behavior. The findings of this research were published in Nature Neuroscience.

Dr. Oren Forkosh, then a postdoctoral fellow who led the research in Chen's group together with PhD student Stoyo Karamihalev, explains that for scientists, understanding how genetics contribute to behavior has remained an open question. Personality, they hypothesized, might be the "glue" that binds the two together: Both genes and epigenetics - which determine how the genes are expressed - contribute to personality formation; in turn, one's personality will determine, to a great extent, how one behaves in any given situation.

Personality is, by definition, something that is both individual for each animal and that remains fairly stable for an animal over its lifetime. Human subjects are generally given personality scores based on multiple-choice questionnaires, but for mice, the researchers needed to start with their behavior and work backward. The mice were color-coded for identification, placed in small groups in regular lab environments - with food, shelter, toys, etc. - and allowed to interact and explore freely. These mice were videoed over several days, and their behavior analyzed in depth. All together, the scientists identified 60 separate behaviors. For example, approaching others, chasing or fleeing, sharing food or keeping others away from food, exploring or hiding.

Next the group created a computational algorithm to extract personality traits from the data on the mice's behavior. This method works something like the five-part personality score used for humans in which subjects are graded on sliding scales that rate extroversion, agreeableness, conscientiousness, neuroticism and openness to experience. For mice, the algorithms the group had developed revealed four such sliding scales, and although the researchers refrained from assigning anthropomorphic labels to these ratings, they can be applied very much like the human ones. That is, each scale is linear, with opposites at either end; when the group assigned the mice personality types based on their scores for these traits, they found that each mouse could be seen to have a unique, individual personality that consistently informed its behavior. To see if these traits were, indeed, stable, the researchers mixed up the groups - a stressful situation for the mice. They found that some of the behaviors changed - sometimes drastically - but what they had assessed as personality remained the same.

What can now be learned from a method for assessing a mouse's personality? Working with Prof. Uri Alon of the Institute's Molecular Cell Biology Department, the team used the linear scales they had developed to plot a "personality space" in which two of the traits were compared. This sort of analysis yields a triangle in which archetypes inhabit the corners (for example, highly dominant and non-commensal (country mice that are not human-friendly), dominant but commensal (city mice), and subordinate). When traits are viewed this way, they can point to evolutionary tradeoffs - for example, in the need to survive and thrive in a dominance hierarchy. "In fact," says Forkosh, "we see that these archetypes - and all the shades in between - are quite natural. These traits have not been bred out of our mice, even though they have lived for generations in labs and could probably not survive in the wild."

Further transcriptional analysis mapped the gene expression patterns in the brains of these mice, which identify a number of genes that were associated with certain personality traits they had classified.

"This method will open doors to all sorts of research," says Forkosh. "If we can identify the genetics of personality and how our children inherit certain aspects of their personalities, we might also be able to diagnose and treat problems when these genes go wrong. We might even, in the future, be able to use these insights to develop more personalized psychiatry, for example, to be able to prescribe the proper treatments for depression. In addition, we can use the method to compare personality across species, and thus to gain insight into the animals that share our world."

Prof. Alon Chen's research is supported by the Vera and John Schwartz Professorial Chair in Neurobiology; the Ruhman Family Laboratory for Research in the Neurobiology of Stress; the Perlman Family Foundation, founded by Louis L. and Anita M. Perlman; the Fondation Adelis; Bruno Licht; and Sonia T. Marschak.

For the first time: A method for measuring animal personality 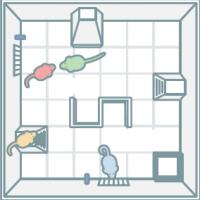 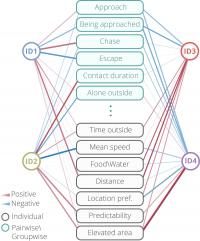