TEMPE, Ariz. – Evidence that early modern humans living on the coast of the far southern tip of Africa 72,000 years ago employed pyrotechnology – the controlled use of fire – to increase the quality and efficiency of their stone tool manufacturing process, is being reported in the Aug. 14 issue of the journal Science. An international team of researchers, including three from the Institute of Human Origins at Arizona State University, deduce that "this technology required a novel association between fire, its heat, and a structural change in stone with consequent flaking benefits." Further, their findings ignite the notion of complex cognition in these early engineers.

"Our illumination of the heat treatment process shows that these early modern humans commanded fire in a nuanced and sophisticated manner," says lead author Kyle Brown, a doctoral candidate at the University of Cape Town, and field and lab director in Mossel Bay, South Africa, for ASU's Institute of Human Origins.

"We show that early modern humans at 72,000 years ago, and perhaps as early as 164,000 years ago in coastal South Africa, were using carefully controlled hearths in a complex process to heat stone and change its properties, the process known as heat treatment," explains Brown.

"Heat treatment technology begins with a genius moment – someone discovers that heating stone makes it easier to flake," says Curtis Marean, project director and a co-author on the paper. Marean is a paleoanthropologist with the Institute of Human Origins and a professor in the School of Human Evolution and Social Change at Arizona State University's College of Liberal Arts and Sciences.

"This knowledge is then passed on, and in a way unique to humans, the technology is slowly ratcheted up in complexity as the control of the heating process, cooling and flaking grows in sophistication," Marean says.

This creates a long-chain technological process that the researchers explain requires a complex cognition, and probably language, to learn and teach.

The heating transformed a stone called silcrete, which was rather poor for tool making, into an outstanding raw material that allowed the modern humans to make highly advanced tools.

The focus of Brown's research involves experimentally replicating the types of tools and production debris found at African archaeological sites to understand how and why people made and used these tools.

"In numerous field surveys with co-author David Roberts, who is a leading expert on silcrete formation, we were unable to locate stone outcrops with material that matched the fine-grained texture and often reddish color of the silcrete artifacts we excavated at Pinnacle Point," Brown says. "The silcrete we had collected was just not suitable for tool production."

Most of the silcrete they found was intensively flaked. It was unusual to find a piece larger than a few centimeters. However, one day in 2007, while Brown and Marean were at the Pinnacle Point Site 5-6 (PP5-6) they found a huge flake of silcrete embedded in ash – the largest piece of silcrete they had ever seen on an archaeological site, nearly 10 centimeters in diameter.

"It looked like it had been accidentally lost in a fire pit," Brown notes. He recalls how many of the silcrete tools from the site had a sheen or gloss that reminded him of tools he had examined in North American collections that were heat-treated.

"That is when we developed the heat treatment idea," Marean says. "The co-association of the ash cemented to the silcrete, the red color of the silcrete, and its inexplicably large size was the genesis conditions of our eureka moment."

To test their theory, Brown placed some of the silcrete stone beneath their fire pit one evening, building a hot fire over the top.

"When I returned to dig the stone out the following day, the results were amazing. After heating, the silcrete became a deep red color and was easily flaked. Most importantly, it looked exactly like silcrete from site PP5-6. Using heated silcrete we were then able to produce realistic copies of the actual silcrete tools," Brown says.

"Here are the beginnings of fire and engineering, the origins of pyrotechnology, and the bridge to more recent ceramic and metal technology," Brown says.

According to Marean, the silcrete bifaces are re-usable tools with many potential functions: effective hunting weapons, excellent knives and items of value for exchange.

"This explains why people would invest so much effort at wood collection and heat treatment for their production," Marean says.

And, the hearths used to test their theory "were designed to mimic what people in the past may have done. So, not only did we heat silcrete, but we barbecued (a 'braai' in South Africa) steaks and chops at the same time as measuring the temperature profiles with our thermocouple," Marean says.

"Our discovery shows that these early modern humans had this complex cognition," Brown says.

"This expression of cognitive complexity in technology by these early modern humans on the south coast of South Africa provides further evidence that this locality may have been the origin location for the lineage that leads to all modern humans, which appeared between 100,000 and 200,000 years ago in Africa," explains Marean.

"There is no consensus as to when modern human behavior appears, but by 70,000 years ago there is good evidence for symbolic behavior," he says. "Many researchers are looking for technological proxies for complex cognition, and heat treatment is likely one such proxy.

"Prior to our work, heat treatment was widely regarded as first occurring in Europe at about 25,000 years ago," Marean says. "We push this back at least 45,000 years, and, perhaps, 139,000 years, and place it on the southern tip of Africa at Pinnacle Point."

The African location was at the center of another discovery by Marean – the documentation of the earliest evidence for exploitation of marine foods and modification of pigments – reported in the Oct. 17, 2007, journal Nature.

"Combined, these results sharply advance our knowledge of modern human origins, and show that something special in human cognition was happening on the coastline of South Africa during this crucial final phase in human origins," Marean says.

He adds that some time around 50,000 to 60,000 years ago, "these modern humans left the warm confines of Africa and penetrated into the colder glacial environment of Europe and Asia, where they encountered Neanderthals.

"By 35,000 years ago these Neanderthal populations were mostly extinct, and modern humans dominated the land from Spain to China to Australia," Marean says.

"The command of fire, documented by our study of heat treatment, provides us with a potential explanation for the rapid migration of these Africans across glacial Eurasia – they were masters of fire and heat and stone, a crucial advantage as these tropical people penetrated the cold lands of the Neanderthal," says Marean.

They work together on the South African Coast Paleoclimate, Paleoenvironment, Paleoecology, Paleoanthropology Project, known as SACP4, which is directed by Marean, funded by the National Science Foundation and the Hyde Family Foundation, and supported by Arizona State University research and academic units including the Institute of Human Origins, Institute for Social Science Research, and School of Human Evolution and Social Change in the College of Liberal Arts and Sciences.

"Our team, working at Pinnacle Point near Mossel Bay, is a leader in revealing the process of how we became who we are today, and we are doing this with state-of-the-art fieldwork and laboratory analysis at this locality," Marean says.

Early modern humans use fire to engineer tools from stone 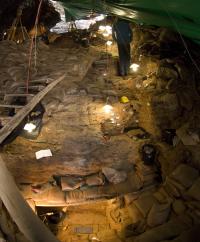