Ocean acidification is no longer a sombre forecast for the Great Barrier Reef but a present-day reality, a new study reveals.

The study, published in the international Journal Scientific Reports, shows carbon dioxide (CO2) and ocean acidification are rapidly increasing on the Reef. Seawater CO2 has risen 6 per cent over the past 10 years and matches the rate of CO2 increases in the atmosphere, confirming the influence of atmospheric CO2 on seawater CO2 levels.

"People talk about ocean acidification in terms of 50 years' time, but for the first time our study shows how fast ocean acidification is already happening on the Reef," said Dr Katharina Fabricius, lead author and Senior Principal Research Scientist at the Australian Institute of Marine Science (AIMS).

The research, a collaboration between AIMS and CSIRO, drew on over a decade of observations collected as part of Australia's Integrated Marine Observing System (IMOS) to conclude that the Reef's rich carbonate seafloor is not buffering against ocean acidification as previously thought.

"Our research shows that acidification is rapidly changing the conditions that support the growth of coral on the Reef. It's never been more important to address ocean acidification in plans to manage the Reef", said Dr. Bronte Tilbrook, a Senior Principal Research Scientist at CSIRO who leads IMOS' observational projects for CO2 and ocean acidification.

Ocean acidification results from seawater absorbing excess CO2 that has been emitted into the atmosphere. The CO2 dissolves in the seawater where it changes the chemistry. This includes decreasing the water's pH, and reducing the aragonite saturation state, which is critical for building the skeletons of reef-building coral and other marine organisms. Under reduced pH conditions, their calcium carbonate skeletons take longer to form and weaken, leaving them more susceptible to damage and erosion.

While long-term data exist for CO2 and ocean acidification trends in open oceans, there have been very few long-term data on these trends in coastal waters around the world, including the Great Barrier Reef. Biological and physical processes like respiration create large fluctuations in CO2 in coastal areas, making the detection of trends more difficult.

The study has filled this important knowledge gap by analysing 10 years of CO2, pH and aragonite saturation state data (2009-2019). These data were collected as part of Australia's IMOS network at two long-term monitoring stations, located 650 kilometres apart at contrasting locations.

The researchers found the minimum CO2 concentrations measured today were likely to already have passed the highest CO2 levels expected 60 years ago, even after accounting for the effects of temperature, nutrients, salinity, and daily and seasonal changes.

"We know now that oceans are taking up about 23% of the excess CO2 from the air. They actually provide a service to humanity by slowing climate change. But the price to pay is that the seawater's carbon chemistry is changing, and we didn't know it was happening in dynamic coastal waters at such fast rates," Dr Fabricius said.

The study, published earlier this year in the journal Global Change Biology, found these baby coral and coralline algae also decreased and seaweed increased as fine suspended sediment increased across the Reef -- with the greatest sediment concentration and organism changes observed closer to the shore. The researchers highlighted effective water quality management as an achievable solution to reduce coastal acidification's impact on the Reef.

Australia's Integrated Marine Observing System (IMOS) is enabled by the National Collaborative Research Infrastructure Strategy (NCRIS). It is operated by a consortium of institutions as an unincorporated joint venture, with the University of Tasmania as Lead Agent.

The future is now: long-term research shows ocean acidification ramping up on the Reef 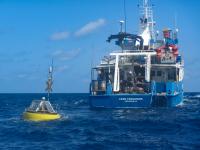 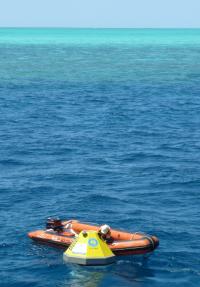