A 300-million-year-old brain of a relative of sharks and ratfish has been revealed by French and American scientists using synchrotron holotomography at the European Synchrotron Radiation Facility (ESRF). It is the first time that the soft tissue of such an old fossil brain has ever been found. The results are published in PNAS this week.

As in many scientific discoveries, it all happened by chance. The team from the National Natural History Museum in Paris (MNHN in French), the ESRF and the American Museum of Natural History in New York was using the synchrotron to study one of the few skulls of an iniopterygian fish that has maintained its three dimensions (most of them are squashed). Inopterygians are an extinct relative of sharks and ratfish, and used to live on the shallow and muddy marine ground. They were not bigger than 50 centimeters.

The scientists used the technique of absorption microtomography to study different samples. One sample, stemming from Kansas (US), revealed a peculiar structure: it was denser than the surrounding matrix that fills the braincase, and which is made of crystalline calcite. In order to elucidate its structure in detail, they decided to use a second technique, X-ray holotomography. Surprisingly, the results showed a symmetrical and elongated object placed in the same position as a brain would have been. The 3D reconstruction showed different parts of the brain, such as the cerebellum, spinal cords or optic lobes and tracts, among others. The only part the researchers couldn't spot was the forebrain, perhaps too thin to become mineralized.

Further analysis of the fossil indicated that the area where the brain-like structure reaches the surface of the sample reveals a high concentration of calcium phosphate, whereas the surrounding matrix is almost pure calcium carbonate. The mineralization of the brain is, according to the main author of the paper, Alan Pradel, from the MNHN, "due to the presence of bacteria that covered the brain shortly before decay and induced its phosphatization".

Scientists already knew that iniopterygians must have possessed a brain, but this new discovery can shed light on brain evolution during major evolutionary transitions, provided that other similar cases of exceptional preservation turn up in key fossils. This research also proves that, thanks to the use of microtomographic techniques in lightsources like the ESRF, details of the anatomical organisation of the nervous system in fossil brains are, from now on, potentially available.

Scientists discover at the European Synchrotron the first fossil brain

The Skull in the Fish 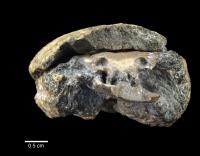