Almost 100 years ago, a revolutionary discovery was made in the field of physics: microscopic matter exhibits wave properties. Over the decades, more and more precise experiments have been used to measure the wave properties of electrons in particular. These experiments were mostly based on spectroscopic analysis of the hydrogen atom and they enabled verifying the accuracy of the quantum theory of the electron.

For heavy elementary particles - for example protons - and nuclides (atomic nuclei), it is difficult to measure their wave properties accurately. In principle, however, these properties can be seen everywhere. In molecules, the wave properties of atomic nuclei are obvious and can be observed in the internal vibrations of the atomic nuclei against each other. Such vibrations are enabled by the electrons in molecules, that create a bond between the nuclei that is 'soft' rather than rigid. For example, nuclear vibrations occur in every molecular gas under normal conditions, such as in air.

The wave properties of the nuclei are demonstrated by the fact that the vibration cannot have an arbitrary strength - i.e. energy - as would be the case with a pendulum for example. Instead, only precise, discrete values known as 'quantized' values are possible for the energy.

A quantum jump from the lowest vibrational energy state to a higher energy state can be achieved by radiating light onto the molecule, whose wavelength is precisely set so that it corresponds exactly to the energy difference between the two states.

To investigate the wave properties of nuclides very accurately, one needs both a very precise measuring method and a very precise knowledge of the binding forces in the specific molecule, because these determine the details of the wave motion of the nuclides. This then makes it possible to test fundamental laws of nature by comparing their specific statements for the nuclide investigated with the measurement results.

Unfortunately, it is not yet possible to make precise theoretical predictions regarding the binding forces of molecules in general - the quantum theory to be applied is mathematically too complex to handle. Consequently, it is not possible to investigate the wave properties in any given molecule accurately. This can only be achieved with particularly simple molecules.

Together with its long-standing cooperation partner V. I. Korobov from the Bogoliubov Laboratory of Theoretical Physics at the Joint Institute for Nuclear Research in Dubna, Russia, Prof. Schiller's research team is dedicated to precisely one such molecule, namely the hydrogen molecular ion HD+. HD+ consists of a proton (p) and the nuclide deuteron (d). The two are linked together by a single electron. The relative simplicity of this molecule means that extremely accurate theoretical calculations can now be performed. It was V.I. Korobov who achieved this, after refining his calculations continuously for over twenty years.

For charged molecules such as the hydrogen molecule, an accessible yet highly precise measuring technique did not exist until recently. Last year, however, the team led by Prof. Schiller developed a novel spectroscopy technique for investigating the rotation of molecular ions. The radiation used then is referred to as 'terahertz radiation', with a wavelength of about 0.2 mm.

The team has now been able to show that the same approach also works for excitation of molecular vibrations using radiation with a wavelength that is 50 times shorter. To do this, they had to develop a particularly frequency-sharp laser that is one of a kind worldwide.

They demonstrated that this extended spectroscopy technique has a resolution capacity for the radiation wavelength for vibrational excitation that is 10,000 times higher than in previous techniques used for molecular ions. Systematic disturbances of the vibrational states of the molecular ions, for example through interfering electrical and magnetic fields, could also be suppressed by a factor of 400.

Ultimately, it emerged that the prediction of quantum theory regarding the behaviour of the atomic nuclei proton and deuteron was consistent with the experiment with a relative inaccuracy of less than 3 parts in 100 billion parts.

If it is assumed that V.I. Korobov's prediction based on quantum theory is complete, the result of the experiment can also be interpreted differently - namely as the determination of the ratio of electron mass to proton mass. The value derived corresponds very well with the values determined by experiments by other working groups using completely different measuring techniques.

Prof. Schiller emphasises: "We were surprised at how well the experiment worked. And we believe that the technology we developed is applicable not only to our 'special' molecule but also in a much wider context. It will be exciting to see how quickly the technology is adopted by other working groups."

Investigating the wave properties of matter with vibrating molecules 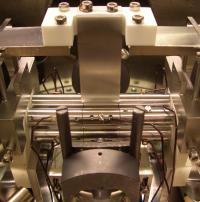