Contaminated soil frequently arrives at the borders through transported items, and is widely recognised as a vector for non-native species, potentially threatening the local agriculture, horticulture and natural ecosystems. However, although soil is the target of management practices that aim to minimise the spread of invasive alien species, crucial knowledge of the biosecurity hazards that can accompany transported soil is currently lacking. While not much is known about the relative survival rates of the transported soil organisms, nor about their establishment probabilities, this information is essential to support optimal policy and management decisions.

A recent study, led by Mark McNeill from AgResearch's Biosecurity and Biocontrol team at Lincoln, New Zealand, and published in the open access journal NeoBiota, shows that biosecurity risks from soil organisms are to increase with declining transport duration and increasing protection from environmental extremes. The scientists sought the answer of a simple question - are soil organisms still risky after a year in the sun?

To find out, Mark and his team collected soil from both a native forest and an orchard and stored it on, in and under sea containers, as well as in cupboards. They tested it after three, six and twelve months for bacteria, fungi, nematodes and seeds.

"Soil can carry unwanted microbes, insects and plants, and this study showed that some died faster when exposed, than when protected in a cupboard. This work shows some of the risks presented by soil contamination," Mark says.

"The results showed that viability of certain bacteria, nematodes and plants declined over 12 months, irrespective of soil source and where the soil was stored. But mortality of most organisms was higher when exposed to sunlight, moisture and desiccation than when protected," he explains. "However, bacterial and fungal numbers were higher in exposed environments, possibly due to ongoing colonisation of exposed soil by airborne propagules."

"The results were consistent with previous observations that organisms in soil intercepted from seaports tend to carry less bugs than soil found on footwear," McNeill notes.

"The research also raised wider questions, because some results were unexpected, including trying to understand why the microbe numbers went up and down like they did in the soil sitting on the sea containers when everything else died off. Was it the circle of life or just new microbe migrants creating new populations?

"We hope that the work will be useful for plant quarantine authorities to assess the risk presented by transported soil based partly on where the soil is found and the age of the soil. This would help authorities to optimally allocate management resources according to pathway-specific risks. Importantly, the study will assist in the development of recommendations for increasing management efficiency and efficacy at national borders."

The research was supported by AgResearch via the Better Border Biosecurity research collaboration and CEBRA, School of Biosciences, & School of Mathematics and Statistics, University of Melbourne, Australia. 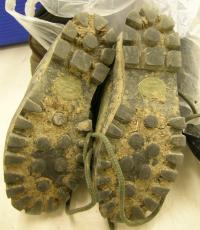 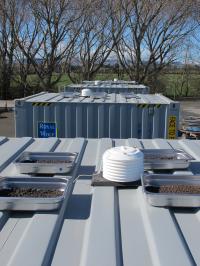 Soil Trays Used by the Researchers