NASA's TRMM Satellite observed heavy rainfall occurring in Typhoon Krosa before it ran into strong wind shear. On Nov. 1, Krosa was a Typhoon that was threatening Hainan Island, China and Vietnam. By Nov. 4 after moving through the South China Sea, Krosa weakened to a depression.

On November 1, 2013 at 1320 UTC/9:20 a.m. EDT NASA's Tropical Rainfall Measuring Mission or TRMM satellite captured a good look at the rainfall rates occurring in Typhoon Krosa. Krosa had weakened slightly when it passed over the northern Philippines but had started to intensify once it got into the South China Sea. Rainfall data collected by TRMM's Microwave Imager (TMI) and Precipitation Radar (PR) instruments was overlaid on an enhanced infrared image at NASA's Goddard Space Flight Center in Greenbelt, Md. to create a picture of Krosa's rainfall. TRMM PR data revealed that rain was falling at a rate of over 116mm/4.5 inches per hour) in Krosa's eye wall. Radar reflectivity values greater than 50 dBZ were found in the same area. A 3-D perspective view on the showed Krosa's vertical structure.

Krosa took its time moving from the northern Philippines east through the South China Sea and made a cyclonic loop that took a couple of days. On Nov. 2 at 05:45 UTC/1:45 a.m. EDT the MODIS instrument aboard NASA's Aqua satellite captured a view of Typhoon Krosa in the South China Sea, when it was still a typhoon and still had an eye. The next day, wind shear had taken a toll on the storm and weakened it.

By Nov. 4 Krosa was centered over open ocean, southeast of Hainan Island, and about 246 nautical miles south-southwest of Hong Kong, China. Maximum sustained winds had dropped to 25 knots/28.7 mph/46.3 kph and the depression was moving south-southwest at 11 knots/12.6 mph/20.3 kph. Strong wind shear is expected to weaken Krosa even more over the next couple of days. Satellite data on Nov. 5 did not detect any strong convection occurring in the depression.

The Joint Typhoon Warning Center issued its final bulletin on the storm on Nov. 4 and forecast Krosa to move in a southwesterly direction where it will make landfall far south of Hue, Vietnam on Nov. 5. 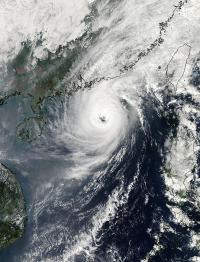