The selective logging of trees in otherwise intact tropical forests can take a serious toll on the number of animal species living there. Mammals and amphibians are particularly sensitive to the effects of high-intensity logging, according to researchers in the Cell Press journal Current Biology on July 31 who conducted a meta-analysis of almost 50 previously published studies from around the world.

"Selective logging in the tropics is not a new phenomenon, and it will continue to be a common use of the forest," says Zuzana Burivalova of ETH Zurich, Switzerland. "We hope that this study will help make selective logging more biodiversity friendly in the future."

Individually, those previously published studies had presented an inconclusive and sometimes conflicting picture of the consequences of the selective removal of trees from tropical forests, the researchers say. By combining those studies, they hoped that some overarching patterns would emerge, and indeed they did.

The new findings indicate that the number of mammal species drops in half at a logging intensity of 38 m3 ha1, equivalent to the extraction of about three or four trees per hectare of forest. Amphibian diversity is halved at a logging intensity of 63 m3 ha1, or about six to seven trees per hectare, the researchers found. (A hectare is a standard unit of land measurement equal to 10,000 square meters, approximately the size of two American football fields.)

Based on invertebrate surveys, primarily representing butterflies, dung beetles, and ants, Burivalova and her colleagues found further diversity losses with logging. Surprisingly, they found that the number of bird species can actually increase in selectively logged areas, likely because birds lost as a result of the disturbance are replaced by other, more generalist species.

Burivalova calls on logging companies to respect logging intensity thresholds that take biodiversity into account. She and her colleagues say that even forests that are currently under sustainable management may be logged at intensities that are far too high for amphibian or mammalian diversity.

"The current logging quotas are designed predominantly to manage the forest for sustainable timber production such that a forest will eventually regenerate its timber stock," Burivalova says. "They are typically not managed for maintaining faunal biodiversity. This is partly because until now it was not clear at what point exactly diversity in logged forests starts decreasing."

She suggests that consumers can help by paying greater attention to the sources of the wood in furniture, musical instruments, and other products they buy, although she notes that this information is often difficult to come by. 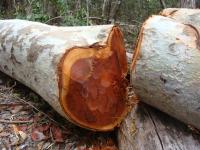 Tree Downed by Logging in Madagascar 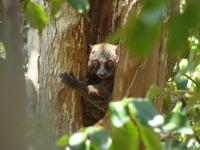