At some point eons ago, our primarily fruit-eating ancestors put their hands in the water to catch and eat aquatic life, inadvertently supplementing their diet with nutrients that initiated a brain development process that eventually led to us. But how did this begin?

Now, according to a research team from Kyoto University, one potential clue may have surfaced thanks to observations of our closest genetic relatives: chimpanzees. The scientists report the first ever evidence of wild chimps habitually catching and consuming freshwater crabs.

Writing in the Journal of Human Evolution, the team describes year-round, fresh water crab-fishing behavior -- primarily among female and infant chimpanzees -- living in the rainforest of the Nimba Mountains in Guinea, West Africa.

"Further, our findings suggest that aquatic fauna may have been a regular part of hominins' diets and not just a seasonal fallback food."

The study began in 2012 when the researchers first observed the chimpanzees fishing for crabs. For two years, they documented the demographics and behavior of these chimps, while also analyzing and comparing the nutritional value of the crabs to other foods in the chimpanzees' diet.

Crabbing, they learned, not only took place year-round -- without regard to season or fruit availability -- but intriguingly was negatively correlated with the chimps' consumption of ants, another diet staple. Mature males were the least likely to consume aquatic fauna.

"Energy and sodium levels in large crabs are comparative with ants," explains Koops, "leading us to hypothesize that crabs may be an important year-round source of protein and salts for females -- especially when pregnant or nursing -- and for growing juveniles."

The study further sheds light on our own evolution, by showing that fishing behaviors may not be restricted by habitat as initially assumed.

"This isn't the first case of non-human primates eating crabs," points out senior co-author Tetsuro Matsuzawa, "but it is the first evidence of apes other than humans doing so. Notably, previous observations were from monkey species in locations consistent with aquatic faunivory -- lakes, rivers, or coastlines -- and not in closed rainforest."

"It's exciting to see a behavior like this that allows us to improve our understanding of what drove our ancestors to diversify their diet." 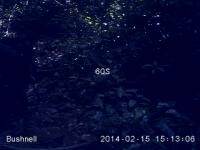 Mother and Child Fishing for Crabs