For members of the established research and education (R&E) networking community, attending conferences or sitting in on workshop sessions is the normal way to learn about the latest equipment, architecture, tools and technologies.

But for network engineers striving to establish basic R&E infrastructure where bandwidth and other resources are scarce, the University of Oregon's Network Startup Resource Center (NSRC) is often the primary information conduit. NSRC staff travel to emerging nations in Africa, Asia-Pacific, Middle East and South America where they hold intensive hands-on training courses combined with direct engineering assistance to bring institutions up to speed.

And for the second time in a year, ESnet and the NSRC have produced and released a library of short explanatory videos to help network engineers around the world gain basic knowledge, set up basic systems and drill down into areas of specific interest. In December, 15 videos detailing the Science DMZ network architecture were posted, covering the background and structure, specific designs, and techniques and technology.

"The goal is to make the information more accessible to networking staff, in the U.S. and particularly in emerging economic areas where institutions are trying to bootstrap a research network," said ESnet Network Engineer Eli Dart, who developed the Science DMZ concept with Brent Draney of the National Energy Research Scientific Computing Center (NERSC). Both ESnet and NERSC are DOE Office of Science User Facilities managed by Lawrence Berkeley National Laboratory.

While many networks were designed to support millions of small connections and rely on firewalls to provide security, R&E networks are increasingly called on to move massive research data sets from experiments or science simulations, which slow to an ooze when they encounter firewalls. The Science DMZ architecture provides a secure network enclave that safely and quickly moves large data sets between scientific facilities. With support from the National Science Foundation, more than 100 universities around the U.S. have deployed Science DMZs to enhance data transfers.

"We were at a university recently and discussed the Science DMZ several times during our workshop," said Hervey Allen, NSRC's assistant director. "The network there had the traditional design of a big old firewall that filtered everything -- it just throttled data throughput."

Partially funded by the National Science Foundation, Google and other organizations, the NSRC works directly with the indigenous network engineers and operators who develop and maintain the Internet infrastructure in their respective countries and regions by providing technical information, engineering assistance, training, donations of networking books, equipment and other resources. The end goal in this work is to make it easier for local scientists, engineers and educators to collaborate via the Internet with their international colleagues by helping to connect communities.

Allen said that while networks capable of carrying 20 to 40 megabits a second may not be overly impacted by firewalls, once the bandwidth reaches a few gigabits, "the firewall just kills them."

In places where high-speed networking is still in nascent stages, such as universities in emerging regions, installing Science DMZs on low-speed connections is useful and helps pave the way to greater capabilities as bandwidth grows. "Often, they never think they'll get up to speeds of multiple gigabits, but in a few years they are often at those rates," Allen said.

Dart said another advantage of the Science DMZ architecture is that it is modular. "You can start small and grow incrementally--you don't have to jump in all at once," he said. "As an organization does more with its cyber-infrastructure, the components can be upgraded and as more researchers use the network, more sites can be added."

While the technology is critical, Dart and Allen both note that sociological factors are at least as important in helping organizations bootstrap their networks.

"Our partnership is so important in that we bring real-world operational understanding to these collaborations, but there is also a strong sociological aspect to making them work," Dart said. "There are smart people everywhere in the world and NSRC finds them and teaches them critical knowledge and skills in person. The end result is that we are helping connect more people in more ways."

Allen said that when the NSRC staff hold a technical training workshop, the participants may not yet have the skills to diagnose problems and together they prioritize steps. In other cases, the local staff may know about the bottlenecks, but institutional administrators want confirmation from outside experts before approving upgrades.

The range of challenges encountered by NSRC staff span a wide spectrum, Allen said, including no fiber--just copper wire or even multiple, separate DSL links across several buildings for connectivity. In some cases, campuses might daisy-chain together switches as they grow the local network organically. But even when an internet service provider comes in with high-bandwidth fiber, the local networks don't necessarily see a big difference in performance, particularly at the desktop.

The video libraries provide NSRC with additional material to use when helping local staff plan network deployments and upgrades.

"It's very cool when you see that a group viewed the educational video content and actually implemented the upgrades after they came up with a plan, deployed new infrastructure, and achieved a dramatic increase in data transfer rates," Allen said.

In the coming year, NSRC staff will be organizing technical training workshops with local partners in Vietnam, Costa Rica, Indonesia, Malaysia, India, Kenya, Pakistan, Rwanda and many other countries, Allen said, and as part of the preparation participants will be pointed to watch the videos in advance.

For Dart, making the videos was also educational. At major meetings and conferences, such information is usually presented in longer presentations, rather than in a series of short bursts.

"It's a different approach to take a large idea and break it down into smaller, digestible components," Dart said. "In this way, we hope to make the information much more accessible to a much wider audience."

About ESnet and Berkeley Lab

ESnet provides the high-bandwidth, reliable connections that link scientists at national laboratories, universities and other research institutions, enabling them to collaborate on some of the world's most important scientific challenges including energy, climate science, and the origins of the universe. Funded by the DOE Office of Science, ESnet is managed and operated by the Scientific Networking Division at Lawrence Berkeley National Laboratory. As a nationwide infrastructure and DOE User Facility, ESnet provides scientists with access to unique DOE research facilities and computing resources.

Lawrence Berkeley National Laboratory addresses the world's most urgent scientific challenges by advancing sustainable energy, protecting human health, creating new materials, and revealing the origin and fate of the universe. Founded in 1931, Berkeley Lab's scientific expertise has been recognized with 13 Nobel Prizes. The University of California manages Berkeley Lab for the U.S. Department of Energy's Office of Science. For more, visit http://www.lbl.gov. DOE's Office of Science is the single largest supporter of basic research in the physical sciences in the United States, and is working to address some of the most pressing challenges of our time. For more information, please visit science.energy.gov. 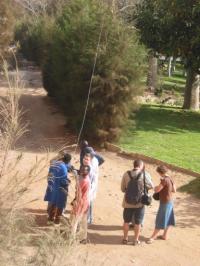