Researchers from LSTM's Centre for Snakebite Research and Interventions (CSRI) have led an international team investigating the evolutionary origins of a novel defensive trait by snakes - venom spitting - and demonstrated that defensive selection pressures can influence venom composition in snakes in a repeatable manner.

In a paper published in the journal Science, the team, which includes authors from the UK, USA, Australia, the Netherlands, Spain, Norway, Brazil and Costa Rica, provide the first example of snake venom evolution being demonstrated to be associated with a role in defence, rather than the wide consensus that venom evolution is driven solely for prey capturing-ability.

LSTM's Dr. Taline Kazandjian is joint-first author on the paper. She said: "The evolution of adaptations is of fundamental importance in biology for understanding the processes by which organisms survive in their ecological niches. Venom systems are fantastic natural models for understanding the molecular basis of adaptations because there is a direct and measurable link between the genes associated with a trait, and the ecologically relevant phenotype, i.e. the venom activity and the consequences of that activity. Defence is not considered to be a strong selection pressure on the evolution of venom activity in snakes, however in this case we clearly demonstrate that defence can be a powerful influence on snake venom evolution."

The team used a variety of laboratory analyses to show that the three independent origins of venom spitting found in cobras and their near relatives corresponded with repeatable changes in venom composition in the three spitting lineages, thus demonstrating strong evidence of convergent evolution - i.e. that evolution has been repeatedly funnelled down the same pathway. The three different groups of spitting cobras were each found to have independently increased the production of PLA2 toxins for use for enhancing the defensive capabilities of their venom.

The researchers demonstrated that these increases in PLA2 toxins result in enhanced pain-causing ability of the venoms, by working synergistically with pre-existing "cytotoxins" found across all cobras, whether they spit their venom or not. The evolution of more potently painful venom likely enables spitting cobras to more effectively defend themselves from predators or aggressors by spitting venom into sensitive eyes, resulting in pain, inflammation and even blindness. That each independent lineage has evolved the same 'solution' for defence, represents an exemplary case of convergent evolution in the natural world.

Dr. Daniel Petras, a postdoctoral researcher at UCSD and joint-first author of the study said: "Through the combination of RNA sequencing, intact protein mass spectrometry and functional analysis of venom from the entire genus of cobras, we were able to identify a toxin class that is responsible for the pain inducing effect of the venom of spitting cobras. Excitingly, we showed that these toxins have evolved independently, yet convergently, in African and Asian spitting cobras."

Looking at why these three groups of closely related 'cobras' (note one is actually not a cobra, but a closely related cobra-like species called the rinkhals) are the only snakes that spit their venom, the team suggest this is likely due to two important preadaptations that are first required to enable the later inception and retention of venom spitting. First, cobras can raise the front third of their body up when hooding, which provides them with an ideal posture for defensively spitting venom at eyes. Second, cytotoxins existed in cobra venom before spitting ability evolved and these toxins likely caused initial low level pain, which was an important precursor to the advanced, highly painful, venom spitting trait seen today.

But what selective pressures stimulated the origin of defensive venom spitting in the first place? LSTM's Professor Nick Casewell, who led the study, explains: "While we cannot be sure, we make the argument that venom spitting is ideally suited to deterring attacks from our very own ancestors - hominins. Bipedal larger-brained hominins are likely to have posed a strong threat to snakes, and we show in this study that the evolutionary timing of the origin of venom spitting in Africa first, and then later in Asia, roughly corresponds with the divergence of our ancestors from chimps and bonobos in Africa, and our ancestors later migration to Asia. While further data is required to robustly test this hypothesis, its intriguing to think that human ancestors may have influenced the origin of this defensive chemical weapon in snakes". 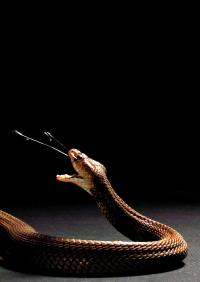