A new study led by Northern Illinois University meteorologist Victor Gensini identifies a method for predicting the likelihood of damaging hailstorms in the United States--up to three weeks in advance.

Hail is easily the most economically destructive hazard posed by severe thunderstorms, producing on average billions of dollars in U.S. losses each year, including damage to roofs, homes and especially crops.

"We found a really strong relationship between jet stream patterns over the Pacific Ocean and U.S. hail frequency," Gensini said. "In simple terms, when the jet stream is really wavy, the likelihood of experiencing hail greatly increases."

The study by Gensini and co-author John Allen of Central Michigan University was accepted for publication in the journal, Geophysical Research Letters.

Two years ago, Gensini led research on a method to predict the likelihood of U.S. tornado activity weeks in advance. Last year, of 26 long-range (two to three weeks) forecasts for increased, average or below average U.S. tornado activity, more than half were "spot on," Gensini said. Most of the other predictions were only slightly off.

The new study is an extension of the tornado research, suggesting a similar method can be used in sub-seasonal forecasts of hailstorms. "There's a high degree of correlation between environments that produce hail and tornadoes, but not all storms produce both hazards," said Gensini, a professor in the NIU Department of Geographic and Atmospheric Sciences.

While the method would be used to forecast hail activity for the country in general, portions of Texas, Oklahoma, Arkansas, Kentucky, Missouri, Mississippi, Tennessee, Illinois and Indiana are most vulnerable to the phenomenon.

Gensini and Allen examined hail observations from national storm data for the period of 1979 to 2016. They compared those events with changes in the Global Wind Oscillation (GWO) index, a collection of climate and weather information that measures atmospheric angular momentum, or the degree of waviness in the jet stream.

The GWO index has eight distinct phases. Four of those phases were reliable predictors of increased inland hail activity during peak storm seasons, according to the study.

"There is a strong connection between the GWO and U.S. hail frequency," Allen said. "This relationship helps to understand what is driving hail variability, and explains to a large degree when we are likely to experience active and inactive periods during the spring and fall."

During the summer, however, the GWO is unreliable as other smaller-scale meteorological processes tend to dominate local weather conditions.

"We will be testing the relationships this spring when severe weather season ramps up," Gensini said.

"We're starting to demonstrate more clearly a pathway to increase the lead time for severe weather forecasts, now with both hailstorms and tornadoes," he added. "We keep adding cinderblocks to the methodology, and it's slowly becoming robust."

Researchers find pathway to give advanced notice for hailstorms 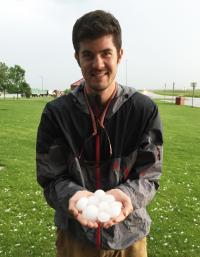