BINGHAMTON, NY - A large international research team, directed by the Portuguese archaeologist João Zilhão and including Binghamton University anthropologist Rolf Quam, has found the oldest fossil human cranium in Portugal, marking an important contribution to knowledge of human evolution during the middle Pleistocene in Europe and to the origin of the Neandertals.

The cranium represents the westernmost human fossil ever found in Europe during the middle Pleistocene epoch and one of the earliest on this continent to be associated with the Acheulean stone tool industry. In contrast to other fossils from this same time period, many of which are poorly dated or lack a clear archaeological context, the cranium discovered in the cave of Aroeira in Portugal is well-dated to 400,000 years ago and appeared in association with abundant faunal remains and stone tools, including numerous bifaces (handaxes).

"This is an interesting new fossil discovery from the Iberian Peninsula, a crucial region for understanding the origin and evolution of the Neandertals," said Quam, an associate professor of anthropology at Binghamton University, State University of New York. "The Aroeira cranium is the oldest human fossil ever found in Portugal and shares some features with other fossils from this same time period in Spain, France and Italy. The Aroeria cranium increases the anatomical diversity in the human fossil record from this time period, suggesting different populations showed somewhat different combinations of features."

The cranium was found on the last day of the 2014 field season. Since the sediments containing the cranium at the Aroeira site were firmly cemented, the cranium was removed from the site in a large, solid block. It was then transported to the restoration laboratory at the Centro de Investigacion sobre la Evolucion y Comportamiento Humanos, a paleoanthropology research center in Madrid, Spain, for preparation and extraction, a painstaking process which took two years.

"The results of this study are only possible thanks to the arduous work of numerous individuals over the last several years," said Quam. "This includes the archaeologists who have excavated at the site for many years, the preparator who removed the fossil from its surrounding breccia, researchers who CT scanned the specimen and made virtual reconstructions and the anthropologists who studied the fossil. This study truly represents an international scientific collaboration, and I feel fortunate to be involved in this research."

"I have been studying these sites for the last 30 years and we have recovered much important archaeological data, but the discovery of a human cranium of this antiquity and importance is always a very special moment," said Zilhão.

The new fossil will form the centerpiece of an exhibit on human evolution in October at the Museu Nacional de Arqueologia in Lisbon, Portugal.

The study, titled "New Middle Pleistocene hominin cranium from the Gruta da Aroeira (Portugal)," appears this week in the Proceedings of the National Academy of Sciences.

400,000-year-old fossil human cranium is oldest ever found in Portugal 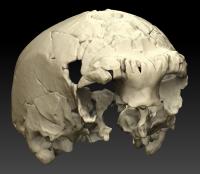 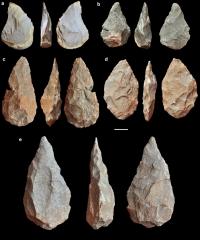