Converting sunshine into electricity is not difficult, but doing so efficiently and on a large scale is one of the reasons why people still rely on the electric grid and not a national solar cell network.

But a team of researchers from the University of Illinois at Urbana-Champaign and the University of Central Florida in Orlando may be one step closer to tapping into the full potential of solar cells. The team found a way to create large sheets of nanotextured, silicon micro-cell arrays that hold the promise of making solar cells lightweight, more efficient, bendable and easy to mass produce.

The team used a light-trapping scheme based on a nanoimprinting technique where a polymeric stamp mechanically emboss the nano-scale pattern on to the solar cell without involving further complex lithographic steps. This approach has led to the flexibility researchers have been searching for, making the design ideal for mass manufacturing, said UCF assistant professor Debashis Chanda, lead researcher of the study.

The study's findings are the subject of the November cover story of the journal Advanced Energy Materials.

Previously, scientists had suggested designs that showed greater absorption rates of sunlight, but how efficiently that sunlight was converted into electrical energy was unclear, Debashis said. This study demonstrates that the light-trapping scheme offers higher electrical efficiency in a lightweight, flexible module.

The team believes this technology could someday lead to solar-powered homes fueled by cells that are reliable and provide stored energy for hours without interruption.

Debashis Chanda joined UCF in Fall 2012 from University of Illinois at Urbana-Champaign with joint appointment in the Nanoscience Technology Center and the College of Optics and Photonics (CREOL). He has published multiple articles on light-matter interactions and metamaterials and is a reviewer for multiple journals in his field. For some of his pioneering works Debashis was awarded a Department of Energy solar innovation award and a Natural Sciences and Engineering Research Council award among others. He also earned a National Science Foundation Summer Institute Fellowship this year.

50 Years of Achievement: The University of Central Florida, the nation's second-largest university with nearly 60,000 students, is celebrating its 50th anniversary in 2013. UCF has grown in size, quality, diversity and reputation, and today the university offers more than 200 degree programs at its main campus in Orlando and more than a dozen other locations. Known as America's leading partnership university, UCF is an economic engine attracting and supporting industries vital to the region's success now and into the future. For more information, visit http://today.ucf.edu. 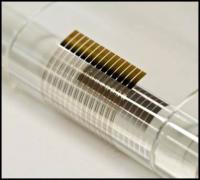