The Younger Toba Tuff supereruption likely caused severe global climate disruption, but early humans were sheltered from the worst effects, according to a study. The eruption of the Toba volcano in Indonesia around 74,000 years ago was the largest volcanic eruption in the past 2 million years, but its impacts on climate and human evolution remain unclear. Benjamin Black and colleagues ran an ensemble of 42 global climate model simulations with various parameters for the magnitude of sulfur emissions, time-of-year of the eruption, background climate state, and sulfur injection altitude to make a probabilistic assessment of the range of climate disruptions the Toba eruption may have caused. The results suggest there was significant regional variation in climate impacts. The simulations predicted cooling in the Northern Hemisphere of at least 4 °C, with regional cooling as high as 10 °C, depending on the model parameters. In contrast, even under the most severe eruption conditions, cooling in the Southern Hemisphere was unlikely to exceed 4 °C, although regions in southern Africa and India may have experienced changes in precipitation at the highest sulfur emission level. The results corroborate independent archaeological evidence suggesting that early humans in these regions thrived through the Toba eruption interval. According to the authors, the ensemble simulation approach could be used to better understand other past and future explosive eruptions. 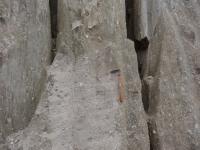