The octopus arm is extremely flexible. Thanks to this flexibility--the arm is said to possess a virtually infinite number of "degrees of freedom"--the octopus is able to generate a vast repertoire of movements that is unmatched by the human arm. Nonetheless, despite the huge evolutionary gap and morphological differences between the octopus and vertebrates, the octopus arm acts much like a three-jointed vertebrate limb when the octopus performs precise point-to-point movements. Researchers have now illuminated how octopus arms are able to form joint-like structures, and how the movements of these joints are controlled.

The new findings, which appear in the April 18th issue of Current Biology, are reported by Tamar Flash of the Weizmann Institute of Science, Binyamin Hochner and German Sumbre of Hebrew University, and Graziano Fiorito of the Stazione Zoologica di Napoli.

The extreme motility of the octopus arm demands a highly complex motor control system. Past work from Dr. Hochner's group showed that when retrieving food to its mouth, the octopus actually shapes its arm into a quasi-articulated structure by forming three bends that act like skeletal joints. This puts an artificial constraint of sorts on the arm's movement and simplifies the otherwise complex control of movement that would be needed for the arm to fetch food from a distant point to the octopus's mouth.

In the new work, the researchers sought to identify how the octopus manages to transform its extremely flexible arm into a structure that acts like a jointed appendage. By recording muscle activity as the arm creates the joint-like bends, the researchers found that the arm generates two waves of muscle contraction that propagate toward each other, setting the second, or medial, joint at their collision point. This is a remarkably simple mechanism for adjusting the length of the arm segments according to where the object is grasped along the arm. The arm also forms a proximal joint near where the arm meets the body, and a distal joint near the suckers that have grasped the food. The medial joint typically exhibits the most movement during food retrieval.

The authors also found evidence that, like certain types of human arm movements, octopus fetching movements are controlled in terms of joint angles, rather than by a system that relies on the brain's coordinate-based map of external space.

The presence of similar structural features and control strategies in articulated limbs (for example, jointed vertebrate arms) and flexible octopus arms suggests that these qualities have evolved convergently in octopuses and in vertebrates, and it also suggests that an articulated limb--controlled at the level of joints--is the optimal solution to the challenge of achieving precise point-to-point movements by a limb.

The researchers include Germán Sumbre, Graziano Fiorito, Tamar Flash, and Dr. Binyamin Hochner of the Hebrew University in Jerusalem, Israel. This work was supported by Defense Advanced Research Projects Agency grant N66001-03-R-8043 and by the Israel Science Foundation grant 580/02.

How the octopus forms an elbow 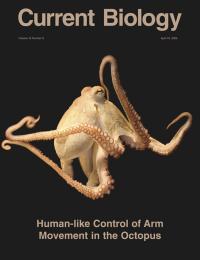