These were the commands for volunteers in a simple experiment that casts doubt on old ideas about mechanisms to control hand muscles. Complete understanding of the result may help explain why manual dexterity is so vulnerable to aging and disease, and even help design more versatile robotic graspers.

A research team led by Francisco Valero-Cuevas of the University of Southern California reports the paradoxical result in the Journal of Neuroscience.

"We expected to find," says the report, "that maximal voluntary downward force would scale with movement speed…. Surprisingly, maximal force was independent of movement speed."

The observation challenges theories that date back nearly seventy years about how the properties of muscles influence their everyday function, and how "redundant" our bodies are.

According to Valero-Cuevas, who holds a joint appointment in the USC Viterbi School of Engineering's department of biomedical engineering and the USC Division of Biokinesiology and Physical Therapy, in many tasks muscle force is affected by physiological "force-velocity" properties that weaken muscles as they move faster.

"That is why your bicycle has gears, and why as a child you could not speed up much on level ground," he explains.

Valero-Cuevas and his collaborators set up a simple experiment to characterize how finger velocity made a difference in the force produced during the common manipulation task similar to rubbing a surface, using a computer track pad or iphone. Adult volunteers wearing a closefitting Teflon cover on their forefingers applied fingertip pressure on a slippery Teflon surface linked to a force-measuring sensor.

"As expected, maximal downward force diminished when motion was added to the task," the researchers wrote. "But remarkably, there were no significant differences … between slow, and fast movement speeds… even though the movement speeds varied 36-fold."

The paper, "Maximal Voluntary Fingertip Force Production is Not Limited by Movement Speed in Combined Motion and Force Tasks," goes on to discuss and rule out several possible explanations for the result, including differing levels of dexterity by the subjects, non-linear responses by muscles, and finger-muscle asymmetries.

The explanation proposed by Valero-Cuevas and collaborators (and former students) Kevin G. Keenan of the University of Wisconsin/Milwaukee, Veronica J. Santos of Arizona State University, and Madhusudhan Venkadesan of Harvard University, is that the universe of possible commands sent by the brain to the muscles is severely limited by the mechanical nature of the task, even for ordinary manipulation tasks.

That is, say the scientists, that even for seemingly-simple real-world tasks where we must control both force and motion, the neuromuscular system can be pushed to its limits of performance.

This complements other recent work by Valero-Cuevas showing how other ordinary tasks like tapping a surface are extremely challenging to the nervous system.

Together these results begin to identify the mechanical pressures that could have driven the evolutionary specializations of our brains and bodies that make our hands so dexterous.

"These apparently esoteric results have tremendous implications for both humans and robots," Valero-Cuevas says. "For one, they bring together basic research and clinical reality by helping explain the high vulnerability of dexterous everyday function to disease and injury in spite of the many muscles and joints we have.

"In addition, they suggest to engineers that adding redundant motors to robots may actually be the key to making them dexterous."

The detailed interactions among muscles and body mechanics are complex and defy easy mathematical modeling at this time, he adds, but further study may offer clues.

The research was supported in part by grants from the NSF and NIH. 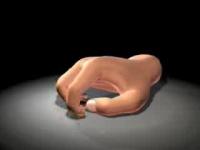