The main question addressed by the study is: Does greater biodiversity increase the economic value of managed ecosystems? "We have found that the possible relationships between economic value and biodiversity are varied," says Professor Thomas Knoke, Head of the Institute of Forest Management at the TUM School of Life Sciences Weihenstephan.

It all depends on the purpose

Even a layman can guess the main purpose of single-species timber plantations: economic benefit through the sale of wood. But forests have a number of functions. They serve as home to a variety of animal and plant species, function as a source of wood as a raw material, have a protective function such as protecting the soil and helping combat global warming and serve recreational purposes as well.

It is common ecological knowledge that the more biodiverse a forest is, the higher the productivity will be. However, the researchers found that "after you have reached a certain mix of trees, adding new species no longer produces significant economic benefits to people." What counts here are the characteristics of the species of trees inhabiting the forest as not every tree has the same value.

The team found that, "maximizing biodiversity at the level of the ecosystem does not maximize economic value in most cases." This particularly holds true if compromises have to be made between different purposes or different economic yields and risks. In such cases, applying a medium level of biological diversity proves most beneficial.

Where biodiversity pays off

The more diverse the plants in an ecosystem are, the better the situation is in terms of risk diversification. This affects the variability of cash value of the ecosystem. The research shows that risk premiums can be lowered just by making a minor change to the level of biodiversity. Risk premium is the reward that a risk-averse person requires to accept a higher risk.

The researchers identified high value potential in biodiversity particularly in connection with the avoidance of social costs. These costs are borne by the public such as diseases caused by air pollution. In its mathematical calculations of these social costs, the study argues that more diverse, mixed agriculture and forest management systems pay off. "Biodiverse ecosystems require less pesticides and fertilizer," explains Thomas Knoke.

A medium degree of biodiversity often creates the best value

"Based on theoretical considerations and empirical evidence, we have found that ecosystems with several, but in all actuality relatively few, plant species can produce more economic benefits than those with only one species as well as those with a large number of species," the scientist summarizes.

These findings in no way indicate that mega biodiverse ecosystems are not worth protecting. Instead they show that economic arguments alone are not sufficient when talking about these biodiversity "hot spots."

What the relationships do highlight are the economic benefits that even a minor increase in biodiversity could have in the agricultural sector. When it comes to forests, the study shows that it is possible to manage a stable forest that serves a variety of functions with four to five species of trees. The relationships identified in the study can therefore be of considerable value in land use planning going forward.

Biological diversity as a factor of production 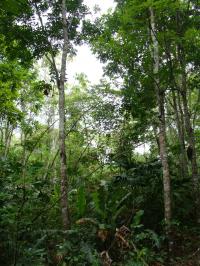