The road to more versatile wearable technology is dotted with iron. Specifically, quantum dots of iron arranged on boron nitride nanotubes (BNNTs). The new material is the subject of a study to be published in Scientific Reports later this week, led by Yoke Khin Yap, a professor of physics at Michigan Technological University.

Yap says the iron-studded BNNTs are pushing the boundaries of electronics hardware. The transistors modulating electron flow need an upgrade.

"Look beyond semiconductors," he says, explaining that materials like silicon semiconductors tend to overheat, can only get so small and leak electric current.

The key to revamping the fundamental base of transistors is creating a series of stepping-stones that use quantum tunneling.

The nanotubes are the mainframe of this new material. BNNTs are great insulators and terrible at conducting electricity. While at first that seems like an odd choice for electronics, the insulating effect of BNNTs is crucial to prevent current leakage and overheating. Additionally, electron flow will only occur across the metal dots on the BNNTs.

In past research, Yap and his team used gold for quantum dots, placed along a BNNT in a tidy line. With enough energy potential, the electrons are repelled by the insulating BNNT and hopscotch from gold dot to gold dot. This electron movement is called quantum tunneling.

"Imagine this as a river, and there's no bridge; it's too big to hop over," Yap says. "Now, picture having stepping stones across the river--you can cross over, but only when you have enough energy to do so."

Unlike with semiconductors, there is no classical resistance with quantum tunneling. No resistance means no heat. Plus, these materials are very small; the nanomaterials enable the transistors to shrink as well. An added bonus is that BNNTs are also quite flexible, a boon for wearable electronics.

The project is supported by the U.S. Department of Energy, the Office of Basic Energy Sciences (Grant DESC0012762). The STM-TEM holder is awarded by the U.S. National Science Foundation, Major Research Instrumentation Program (Award DMR 0820884).

The iron stepping stones to better wearable tech without semiconductors 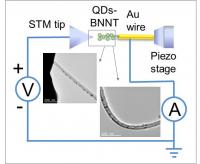