Uncertainties in the evolutionary tree of birds and their closest relatives have impeded deeper understanding of early flight in theropods, the group of dinosaurs that includes birds. To help address this, an international study led by HKU Research Assistant Professor Dr. Michael Pittman (Vertebrate Palaeontology Laboratory, Division of Earth and Planetary Science & Department of Earth Sciences) and co-first-authored by his former Postdoctoral Fellow Dr. Rui Pei (now an Associate Professor at the Institute of Vertebrate Paleontology and Paleoanthropology, Beijing), produced an updated evolutionary tree of early birds and their closest relatives to reconstruct powered flight potential, showing it evolved at least three times. Many ancestors of the closest bird relatives neared the thresholds of powered flight potential, suggesting broad experimentation with wing-assisted locomotion before flight evolved. The ten-man five-country team published their findings in the prestigious high-profile journal Current Biology.

"Our revised evolutionary tree supports the traditional relationship of dromaeosaurid ("raptors") and troodontid theropods as the closest relatives of birds. It also supports the status of the controversial anchiornithine theropods as the earliest birds," said Dr. Pei. With this improved evolutionary tree, the team reconstructed the potential of bird-like theropods for power flight, using proxies borrowed from the study flight in living birds. The team found that the potential for powered flight evolved at least three times in theropods: once in birds and twice in dromaeosaurids. "The capability for gliding flight in some dromaeosaurids is well established so us finding at least two origins of powered flight potential among dromaeosaurids is really exciting," said Dr. Pittman. Crucially, the team found that many ancestors of bird relatives neared the thresholds of powered flight potential. "This suggests that theropod dinosaurs broadly experimented with the use of their feathered wings before flight evolved, overturning the paradigm that this was limited to a much more exclusive club," added Dr. Pittman.

This study is the latest in the Vertebrate Palaeontology Laboratory's long-term research into the evolution of early birds and their closest relatives (see Notes). Asked about future plans, Dr. Pittman replied: "We have helped to better constrain the broader functional landscape of theropods just before flight evolved and in its earliest stages. We plan to now focus on the dromaeosaurids and early birds that we have shown to have the potential for powered flight to improve our understanding of what it took to fly and why."

The paper is published in Current Biology and can be accessed here: https://www.sciencedirect.com/science/article/pii/S0960982220309994

5. Scientists reveal how dinosaurs became able to shake their tail feathers (May 2013): https://www.hku.hk/press/press-releases/detail/9693.html 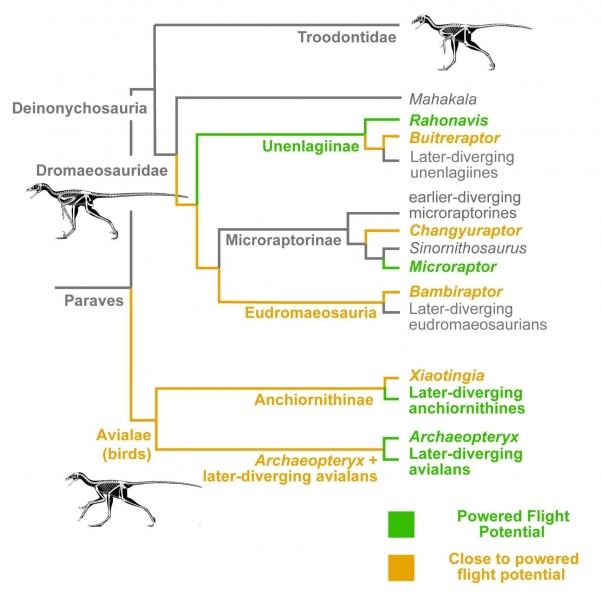