Penn State researchers have used computed tomography (CT) technology to virtually glue newly-discovered skull fragments of a rare extinct lemur back into its partial skull, which was discovered over a century ago. Alan Walker, Evan Pugh Professor of Anthropology and Biology at Penn State, and Research Associate in Anthropology Timothy Ryan, led the research. The different fragments of this lemur's skull are separated by thousands of miles, with the partial skull in Vienna and the pieces of frontal bone in the United States. The result of the digital manipulation is a nearly complete skull of Hadropithecus stenognathus, which is one of only two known skulls for this species. An article describing the work will be published in the early edition of the Proceedings of the National Academy of Sciences during the week of 28 July through 1 August 2008.

The original specimens of Hadropithecus stenognathus were found in Andrahomana Cave in Madagascar by a professional fossil-collector, Franz Sikora, in 1899. He sent a jaw and the partial skull to Ludwig Lorenz von Liburnau in Vienna, who published a paper in 1902 describing the skull and jaw as the remains of a new species. Since then, Hadropithecus has been an enigma because few of its fossil remains had been discovered until recently. In addition, limb bones of other lemurs sometimes were identified incorrectly as belonging to Hadropithecus.

In 2000, Natalie Vasey -- then a postdoctoral fellow working with Walker and now an associate professor of anthropology at Portland State University -- initiated a project to return to Andrahomana Cave in hopes of finding new specimens. She joined senior colleagues David Burney, director of conservation and director of living collections and horticulture at the National Tropical Botanical Garden in Kalaheo, Hawaii; Laurie Godfrey, professor of anthropology at the University of Massachusetts-Amherst, William Jungers, professor and chairman of the Department of Anatomical Sciences of Stony Brook University in New York, and Ramilisonina, retired assistant director of the Musée d'Art et d'Archéologie in Antananarivo. In 2003, the team excavated new cranial fragments and new limb bones of the elusive extinct lemur.

"I was extremely interested to read about the new specimens from Andrahomana Cave," says Walker. "When I saw the photos of the new pieces of frontal bone, I was positive they would fit into the skull." So were the members of the excavation team, once Walker explained his idea.

By chance, Walker already had CT scans of the incomplete Vienna skull in his laboratory for use on another project. Those scans had been provided by Ursula Göhlich, curator at the Natural History Museum in Vienna and her colleague Gerhard Weber, University Professor of Anthropology at the University of Vienna.

The fossilized pieces found in 2003 were sent to Penn State, where Walker and Ryan CT scanned them at the Penn State Center for Quantitative Imaging. Ryan used his expertise in digital imaging and primate anatomy to try to fit together the older scan from Vienna and the new scan of the fragments.

"From the moment we combined the two datasets," Ryan said, "it was obvious that the fossils all belonged to the same individual. Because the newly-discovered fragments fit into the skull so cleanly, we decided to attempt a more thorough virtual reconstruction, filling in other missing pieces using the CT data or making mirror images of undamaged sections to restore damaged ones."

The result was a beautiful image and three-dimensional print of the skull of the extinct lemur species. "This is very much a modern research story," remarks Ryan. "We did all the work with the help of computers and neither all of the scientists nor all of the specimens were ever in the same room."

The digitally reunited remains offered new insights about Hadropithecus. For the first time, its cranial capacity (115 ml.) has been measured accurately. Because the excavators also uncovered many limb and trunk bones of the same individual lemur, the team could estimate its body size reliably. Surprinsingly, Hadropithecus was as big as a large male baboon and had a relative brain size as large as that of some large monkeys. In fact, the extinct lemur had one of the largest brains relative to its body size of any known prosimian (a group comprised of lorises, lemurs, bushbabies, and other similar animals).

The skull shape of Hadropithecus is unusual. Its skull vault sports a large, bony crest -- similar to that seen on gorillas -- for the attachment of powerful chewing muscles. With big chewing muscles, a deep jaw, and a flat face, the skull of Hadropithecus seems mechanically suited to eating hard foods, such as seeds or nuts. This idea is supported by microwear studies showing that the enamel of the Hadropithecus teeth is heavily pitted and scratched. However, while other animals that feed on hard objects have thick dental enamel and interwoven enamel prisms that prevent tooth breakage, Hadropithecus does not. Analysis of nitrogen and carbon isotopes in the bones of other specimens of Hadropithecus suggests a diet high in tough, fibrous succulents, tubers, or grasses -- not nuts or seeds. The team is investigating whether grit clinging to such plants in Madagascar would create the observed microwear pattern.

This research was supported by the National Science Foundation, the European Union, and Penn State and Portland State Universities.

IMAGES
High-resolution images related to this story are posted on the Web at: http://www.science.psu.edu/alert/Walker7-2008.htm . After the embargo lifts, image captions and the text of this press release will be posted there, as well.

Piecing together an extinct lemur, large as a big baboon

Piecing Together an Extinct Lemur, Large as a Big Baboon (2 of 3) 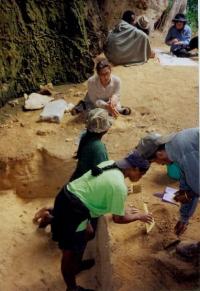 Piecing Together an Extinct Lemur, Large as a Big Baboon (3 of 3)