Most animals have a dorso-ventral (back-to-belly) body axis, which determines for instance the localized position of the central nervous system, dorsal in humans, ventral in insects. Surprisingly, despite enormous morphological differences, the same signaling molecules of Bone morphogenetic protein (BMP) molecules establishes the dorso-ventral axis including the central nervous system in both insects and vertebrates, which led to the conclusion that this molecular mechanism was already present in the common ancestor.

How deep can we trace the origin of the dorso-ventral axis? It turned out that sea anemones provides the answer: "By analysing the role of BMPs during embryogenesis of the sea anemone Nematostella vectensis, we could get insights into the evolution of animal body axes." says Ulrich Technau of the Department of Molecular Evolution and Development at the University of Vienna.

Sea anemones belong to the phylum of cnidarians, such as corals, hydra and jellyfish and they evolved at least 600 Million years ago. Most textbooks consider cnidarians as radially symmetric, i.e. they have one apparent body axis, the oral-aboral axis. In their newest study in Cell Reports the scientists found that the sea anemone has even several BMPs and BMP antagonists. During early embryogenesis, these signaling molecules establish a complex interaction network to build up an activity gradient - "yet, perpendicular to the main body axis" explains Ulrich Technau. On the basis of detailed genetic analyses the authors conclude that the BMP signaling system is used for the establishment of a second body axis. However, the gradient of signaling molecules is interpreted and used differently in the sea anemone compared to vertebrates and insects.

Mesenteries instead of central nervous system

Instead of determining the position of the central nervous system, the sea anemone uses the BMP activity gradient to determine the position and formation of so called "mesenteries", which are epithelial folds that reach into the gastric cavity, harboring retractor muscles and gonads.

Surprisingly, the BMP-gradient regulates the regional activation of "Hox genes", which are famous for their role in specifying the segmental identity along the main body axis, such as wings and legs in flies or ribs and limbs in vertebrates. This connection of a signaling system of the dorso-ventral body axis with regulator genes of the anterior-posterior body axis is surprising and unexpected. The researchers then asked how such signaling networks could have evolved over hundreds of millions of years in order to give rise to quite different morphological structures in various animal lineages. In a collaboration with mathematicians of the ETH Zürich they could show in mathematical modelling, which parts of the network were kept constant until today and which could be changed, in order to evolve new functions. "The BMP network is not only an example of a signaling system that is involved in axis formation for more than 600 Million years, but we can also learn from the comparison with sea anemones, how such important networks could evolve" summarizes Technau.

Evolution of the back-to-belly axis 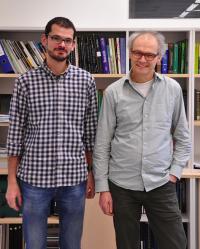