In the more than two years since University of Cincinnati researchers unearthed the 3,500-year-old tomb of a Bronze Age warrior in southwest Greece, an incredible trove of riches has emerged, including four gold signet rings that have challenged accepted wisdom among archaeologists about the origins of Greek civilization.

But that wasn't the only secret hidden there beneath the hard-baked clay.  It would take another year before the so-called "Griffin Warrior" revealed his most stunning historical offering yet: an intricately carved gem, or sealstone, that UC researchers say is one of the finest works of prehistoric Greek art ever discovered.

The "Pylos Combat Agate," as the seal has come to be known for the fierce hand-to-hand battle it portrays, promises not only to rewrite the history of ancient Greek art, but to help shed light on myth and legend in an era of Western civilization still steeped in mystery.

The seal is the latest and most significant treasure to emerge from the treasure-laden tomb of the Griffin Warrior, which was hailed as the most spectacular archaeological discovery in Greece in more than half a century when it was uncovered in an olive grove near the ancient city of Pylos in 2015.

The remarkably undisturbed and intact grave revealed not only the well-preserved remains of what is believed to have been a powerful Mycenaean warrior or priest buried around 1500 B.C., but also an incredible trove of burial riches that serve as a time capsule into the origins of Greek civilization.

But the tomb didn't readily reveal its secrets. It took conservation experts more than a year to clean the limestone-encrusted seal, say dig leaders Shari Stocker, a senior research associate in UC's Department of Classics, and Jack Davis, the university's Carl W. Blegen professor of Greek archaeology and department head.

As the intricate details of the seal's design emerged, the researchers were shocked to discover they had unearthed no less than a masterpiece.

"Looking at the image for the first time was a very moving experience, and it still is," said Stocker. "It's brought some people to tears." Davis and Stocker say the Pylos Combat Agate's craftsmanship and exquisite detail make it the finest discovered work of glyptic art produced in the Aegean Bronze Age.

"What is fascinating is that the representation of the human body is at a level of detail and musculature that one doesn't find again until the classical period of Greek art 1,000 years later," explained Davis. "It's a spectacular find."

Even more extraordinary, the husband-and-wife team point out, is that the meticulously carved combat scene was painstakingly etched on a piece of hard stone measuring just 3.6 centimeters, or just over 1.4 inches, in length. Indeed, many of the seal's details, such as the intricate weaponry ornamentation and jewelry decoration, become clear only when viewed with a powerful camera lens and photomicroscopy.

"Some of the details on this are only a half-millimeter big," said Davis. "They're incomprehensibly small."

The miniature masterpiece portrays a victorious warrior who, having already vanquished one unfortunate opponent sprawled at his feet, now turns his attention to another much more formidable foe, plunging his sword into the shielded man's exposed neck in what is sure to be a final and fatal blow.

It's a scene that conjures the sweeping and epic battles, larger-than-life heroes and grand adventures of Homer's "The Iliad," the epic Greek poem that immortalized a mythological decade-long war between the Trojan and Mycenaean kingdoms. While the researchers can't say that the image was intended to reflect a Homeric epic, the scene undoubtedly reflects a legend that was well known to Minoans and Mycenaeans, says Stocker.

"It would have been a valuable and prized possession, which certainly is representative of the Griffin Warrior's role in Mycenaean society," she explained. "I think he would have certainly identified himself with the hero depicted on the seal."

Though the seal and other burial riches found within the tomb suggest the Griffin Warrior held an esteemed position in Mycenaean society, that so many of the artifacts are Minoan-made raises intriguing questions about his culture.

Scholarly consensus has long theorized that mainlander Mycenaeans simply imported or robbed such riches from the affluent Minoan civilization on the large island of Crete, southeast of Pylos. Although the Minoans were culturally dominant to the Greek mainlanders, the civilization fell to the Mycenaeans around 1500-1400 B.C. -- roughly the same time period in which the Griffin Warrior died.

In a series of presentations and a paper published last year, Davis and Stocker revealed that the discovery of four gold signet rings bearing highly detailed Minoan iconography, along with other Minoan-made riches found within the tomb, indicates a far greater and complex cultural interchange took place between the Mycenaeans and Minoans.

But the skill and sophistication of the Pylos Combat Agate is unparalleled by anything uncovered before from the Minoan-Mycenaean world, say the researchers. And that raises a bigger question: How does this change our understanding of Greek art in the Bronze Age?

"It seems that the Minoans were producing art of the sort that no one ever imagined they were capable of producing," explained Davis. "It shows that their ability and interest in representational art, particularly movement and human anatomy, is beyond what it was imagined to be. Combined with the stylized features, that itself is just extraordinary."

The revelation, he and Stocker say, prompts a reconsideration of the evolution and development of Greek art.

"This seal should be included in all forthcoming art history texts, and will change the way that prehistoric art is viewed," said Stocker.

Stocker and Davis will present findings from the Pylos Combat Agate in a paper to be published later this month in the journal Hesperia.

Meanwhile, work continues in unlocking the full mysteries of the Griffin Warrior's tomb. Davis and Stocker, along with other UC staff specialists and students, have altogether catalogued more than 3,000 burial objects discovered in the grave, some of which are still in the process of being cleaned and preserved.

"There will be many more surprises to come, for sure," said Davis.

The tomb revealed a remarkably intact skeleton, which UC researchers dubbed the "Griffin Warrior" for the discovery of an ivory plaque adorned with a griffin -- a mythical beast with the body of a lion and the head and wings of an eagle -- buried with him. 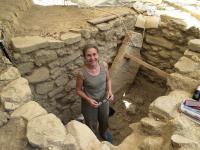