An international team of researchers, with a new study published in Science with DTU Space as lead author, finds that the bedrock below the West Antarctic Ice Sheet is rising much more rapidly than expected, revealing a very different Earth structure than previously believed. This discovery has important implications in understanding the past, present and future climate changes in Antarctica.

The unexpectedly fast rate of the rising earth may increase the stability of the ice sheet against catastrophic collapse due to ice loss. At the same time the rapid rise, known as uplift, also affects gravity measurements. This implies that up to 10 percent more ice has melted off the West Antarctica Ice Sheet (WAIS) than previously assumed.

"The results of our work will provide a very important contribution in the understanding of dynamics of the Earth along with the ice melting processes in Antarctica," said leading author of this new study, postdoctoral researcher Valentina R. Barletta at DTU Space, the National Space Institute at the Technical University of Denmark.

"The large amount of water stored in Antarctica has implications for the whole planet, but especially for northern Europe", said Barletta, "because of a combination of gravitational effects, surprisingly, the ice lost in Antarctica mostly raises the sea level here, in northern Europe. In contrast, the ice lost in Greenland has no effect here, but it raises the sea level in the southern hemisphere and further destabilizes the WAIS."

"The uplift velocity in ASE was measured at up to 41 millimeters per year, one of the fastest rates ever recorded in glaciated areas. In comparison, the GPS stations installed nearby the Greenland ice streams record up to 30 millimeters per year, but we know that it is caused by an immediate elastic rebound of the earth, acting like a spring" said Abbas Khan, one of the coauthors and associate professor at DTU Space.

Participating researchers led by scientists at the Ohio State University (OSU) installed a series of GPS stations on rock outcrops around the ASE to measure its rise in response to thinning ice. "The rapid rise of the bedrock in this part of Antarctica suggests that the geology underneath the ice is different from what scientists had previously believed. The rate of uplift we found is unusual and very surprising. It's a game changer," said Terry Wilson, one of the leaders of the study and professor emeritus of Earth Sciences at OSU.

Under the massive weight of ice the earth subsides. "When the ice melts and gets thinner, the earth readjusts, and rises immediately by a few millimeters, which depends on the ice lost," explains Valentina Barletta. "But the earth also acts a bit like a very hard memory-foam mattress. And it slowly keeps readjusting for several thousand years after the melting. In Scandinavia the bedrock is still rising about 10 millimeters per year because of the last ice age."

Scientists call this delayed readjustment Glacial Isostatic Adjustment (GIA), which can also be described as the Earth retaining memory of the ice lost in the past. How fast this readjustment takes place, depends on the properties of the mantle, the portion inside the earth between the crust and the core that is 2900 kilometers thick.

"Thanks to the satellite observations, we were able to estimate the current ice thinning in ASE, and conclude that the measured uplift rate is up to 4 times larger than expected based on the current ice melting rates", says Barletta. Therefore the new study focused on the delayed readjustment of the Earth.

Valentina R. Barletta has run thousands of GIA simulations using different possible combinations of Earth properties and ice loss scenarios and found that the only way to produce such high uplift is for the Earth mantle to be very fluid (technically low viscosity).

"Normally we would see significant uplift happen slowly over thousands of years after the ice age, but here we see it take place in centuries or even decades. This tells us that the mantle below is very fluid and moves quickly when the weight of the ice is taken off," said Barletta. And the uplift is getting faster. According to this new study, in 100 years, the uplift rates at the GPS sites will be 2.5 to 3.5 times more rapid than currently observed.

Among the direct consequences of this study there is a revised estimate of the ice loss in ASE. When a massive amount of the ice melts it reduces the local gravity and leaves fingerprints that can be measured by satellites and used to estimate the total mass lost. But the earth's readjustment also produces a gravity change that partially compensates for this loss and hides the ice signal. "Now we know that in ASE the earth readjusts so fast that 10 percent of the ice loss was hidden, but now we can fix that," said Barletta.

The fast earth response is potential good news for the future of the WAIS. In this area of Antarctica most of the ice is grounded below sea level, and therefore vulnerable to melting from below by ocean water flowing in underneath the ice sheet. Here the earth uplift works as a feedback that can slow down the ice retreat in different ways.

The uplift raises the so called 'pinning points' - elevated features that pin the ice sheet to the bedrock, preventing the retreat of the grounded ice. At the same time the uplift changes the inland slope of the ground that becomes more effective in holding the ice from sliding away. In addition, the massive amount of the ice lost reduces the local gravity and the gravitational pull on the water, resulting in a lower sea level at the adjacent Antarctic coast. This in turn reduces the buoyancy of the whole ice sheet, promoting the stability of the ice sheet.

Modeling studies have shown that bedrock uplift could theoretically protect WAIS from collapse, at least in case of moderate climate changes. But it was believed that the process would take too long to have practical effects.

The mantle that we discovered under ASE is more fluid and hotter, and therefore the earth uplifts faster than in the most optimistic hypotheses used in previous studies. "Under many realistic climate models, this should be enough to stabilize the ice sheet," Wilson said. But, if future global warming is too extreme, according to the scientists the WAIS will most likely still collapse regardless of stabilizing feedbacks.

"Apart from giving us a new picture of the earth dynamics in Antarctica, the new findings will push to improve ice models for WAIS to get a more precise picture of what will happen in the future" said Barletta. "They also tell that we clearly need to improve our knowledge of the Earth structure under the whole Antarctic continent. To do so we use GPS in the few areas where they can be installed, and elsewhere we use data from ESA's Earth Explorer GOCE and seismic tomography." 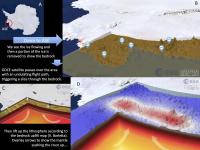